In our last report we featured 2 youth leader’s reflection on their leadership work with BACCA, this week we have a new addition from Roberto Clemente High School and his name is Jerry Vega. Jerry became involved with BACCA through the service learning project when he was a freshman. Jerry will join Michelle Guzman, Mia Espinosa and Sikrra Nicholas in all the community events and our Anti-Underage drinking campaign. The Barrio Arts Culture Communications Academy made sure to leave a mark on this year’s parade. All four youth leaders marched with different messages in support of the campaign is excited to participate in this year’s Puerto Rican People’ Parade. As an after-school program, BACCA seeks to also address youth challenges like high school dropout rates, and underage drinking in our community. Recognizing that the school dropout rate directly correlates to other indicators of risk, this hands-on program is designed to mix culture, community, and technology across a range of media to encourage participants to transform their community. With new additions like Jerry and Michelle we seek to expand our support network and educate people from all age groups as well as local businesses about the importance of maintaining a community of excellence. This Friday Program Director Maria Borrero will meet with different sectors of the community in BACCA’s last Coalition meeting for fiscal year 2014. We are excited to leave footprints in future events in the community like “Fiesta Boricua” and Barrio Arts Festival. If you are interested in joining our effort please feel free to communicate via e-mail at mariab@prcc-chgo.org

During my time at BACCA as we were tirelessly preparing for the parade I have learned a lot. I had the opportunity to work hands on with boards, painting, designing , and etc. This was very helpful by enhancing my communication skills with my peers and boss. Not only did I enhance in that area, but also socially too. I learned a lot of inspiring people who put there time and effort to help put the things to together for the parade. 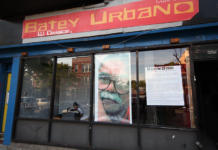