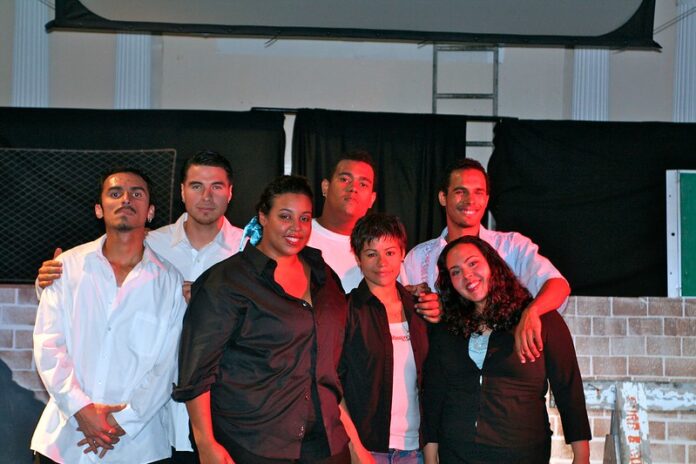 AmeRican, defining myself my own way any way many  ways,

Am e Rícan, with the big R and the accent on the i!

Although in his final years Tato Laviera lost his sight, he could intuit more than most could observe, and was able to register and transform the energy in a room and the mood of those around him. I met Tato almost a decade ago following a presentation he gave at DePaul University. It was 2005. That evening, he was to be the feature at a poetry event at Café Teatro Batey Urbano, a grassroots youth space, new, only in its third year of existence. I quickly learned in the car ride to Humboldt Park that, in the company of Tato, spontaneity was the rule. I watched as mundane words exchanged in conversation came alive, as Tato, perpetually composing prose, dissected syllables and played with meanings, intersecting languages, and dialects in a fashion too unruly and iconoclastic to be characterized as “Spanglish” or worse, “bilingual.” Language, for Tato, was not simply an inheritance, but an invitation. He loved to speak, I think because of his ability to humor, to call forth responses, often in the form of nonverbal gestures expressed through laughter, shifts in a seat, and the chorus of sustained applause his readings inevitably produced. But he also loved to listen, to hear personal stories, and when they were not forthcoming – which they rarely were in my case – he’d shift his Panama hat slightly and probe like a good journalist.

I had the privilege of working closely with Tato for a number of years following his first visit to Paseo Boricua, that same passageway that had enthralled the legendary Pedro Pietri in his last visit to Chicago. Tato undertook, unknowingly (I believe) the very project that the famed author of the “Puerto Rican Obituary” had desired to do. Both of these Nuyorican literary giants expressed a deep and humbling curiosity about the Puerto Rican experience in Chicago. What accounted for its rhythms and mythologies? Indeed, Tato would frequently tell me that he was going to figure out, no matter how long it took, the source of the unabashedly Puerto Rican spirit he felt in Humboldt Park and Paseo Boricua. I fear that he was too modest to have realized the many ways he energized that very spirit and left his signature on it.

I am not certain how the idea emerged, but the following year, months before we would celebrate the 40th anniversary of the “Division Street Riot,” the Puerto Rican Cultural Center contracted Tato to write and direct a play on this historic event. A talented group of Batey Urbano youth worked with Tato in intense rehearsals over several months and weeks to give life to the “The Spark.” Over a hundred people attended its premiere, held just days before the Puerto Rican People’s Parade on Division Street. Through the characters of “Pa’Lante,” “Asimilada,” “Young Lord,” “Hábito,” and others, a history almost forgotten was recovered and retold that evening. For as the cast chanted, “No justice, no peace, el silencio nos mata aquí.”

In delving into that history, pieced together through conversations and newspaper clippings, I think he began to make sense of the stubborn pride of the community he came to know so intimately. Afterwards, he told a Chicago Tribune reporter, “We hope to promote a dialogue and discussion about the fate of Puerto Ricans in this city.” True to its namesake, the play was a catalyst for further investigations and productions. Never satisfied by small ideas, Tato imagined four plays. The following two summers he respectively crafted the “1977 PR Riots” and “Bandera a Bandera,” which explored the birth of Paseo Boricua in 1995. The final play, entitled “The Gentrifiers,” sadly never came to fruition, although he never ceased to remind me that we had unfinished business.

The title of the final, unwritten play would have dramatized the contemporary moment and the ongoing struggle to preserve a Puerto Rican barrio in the Windy City. The theme of gentrification and displacement was not foreign to him; Tato had experienced the demise of the Lower East Side and yuppie encroachments throughout Spanish Harlem, where he last called home. We will never know how he would have chosen to represent our fight against gentrification, or even how the series of plays would have concluded. Did Pa’Lante and his fellow activists triumph? Did Paseo Boricua persist and persevere? Those questions, however, remain for the real life actors that inspired Tato’s characters.

I last saw Tato a couple of years ago at Brown University. He was one of the main features of that year’s “Puerto Rican Week.” Now more comfortable sitting than standing, he shared his gifts with a room full of undergraduates, who quickly became enamored by his smile, energy, and wordplay. His words evoked bomba drums, street hustles, and Boricua pride, moving bodies and souls with his relentless cadence. At his insistence, a few poets and I opened for Tato. After dodging so many of his previous requests, I agreed to rap a couple verses. After I finished, he tugged my arm and told me, as heartily as he could, “You’re good, man!” You see, Tato believed us all to be poets; he also believed us to be much more than we allowed ourselves to be.

As he should, Tato will be remembered for his mastery of language and imagery, his defiant affirmation of Blackness and our multi-inflected tongue, and for his challenge to narrow, essentialist conceptions of Puerto Rican identity. He will be celebrated as one of the founders and stalwarts of the Nuyorican literary movement, a visionary chronicler of our Diasporic experience. But in this, he was more than a poet. He was also a teacher, a mentor, and a friend. Un patriota who left us far too soon, like our very own “Chitown Brown,” David Hernández.

Tato will be greatly missed by the many he met, worked with, or touched in Paseo Boricua and throughout his life’s travels. And yet, we can draw strength and joy from the fact that he is now in that Boricua pantheon, already busy writing, performing, and inspiring –because even there he is needed. At this very moment, he is leading our ancestors in reciting his poem, “Boricua”:

We are a people

who love to love