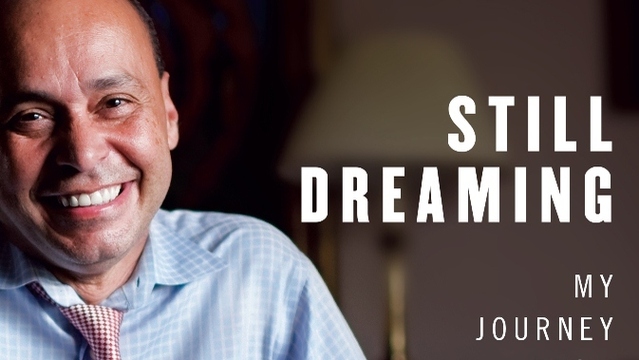 Congressman Luis Gutiérrez talked to over sixty students and faculty at Yale University this past Friday about his newly released memoir and the journey he endured as a Latino going to Capitol Hill.  Sponsored by Despierta Boricua, Yale’s Puerto Rican Student Association, and La Casa Cultural Julia de Burgos, the university’s Latino cultural center, Congressman Gutiérrez was invited to speak and share his story with the Yale community.  Reading an excerpt from his memoir and connecting the story to his motivation to pursue higher education, Congressman Gutiérrez talked about when he moved to Puerto Rican and saw that Puerto Ricans held various successful careers from governor to school teacher.  “I saw this whole world where myths about Puerto Ricans were just broken when I recognized all those things I could be,” Gutiérrez explained.

The representation of Latinos in positions of power inspired him, and his presence at Yale motivated the audience.  His immediate connection with the audience had everyone at ease, and thinking deeply about the points he brought up.  Hearing Gutiérrez talk, Dean Rosalinda Garcia, associate dean of Yale College and Director of the Yale Latino Cultural Center, said, “he’s just another person; he could be your uncle or your cousin, and I think that’s really inspirational.  As a dean of students, I take a lot of pleasure in bringing leaders like that on campus because it allows our students to see themselves in Latino leadership.”

“Having him at Yale and seeing how relatable he is to us all makes me realize the work that my peers and I are doing will not be in vain,” William Genova, president of Despierta Boricua said.  “We stand on the shoulders of amazing Latinos that have come before us, and the work that the Congressman and so many other have done for our communities gives my generation the opportunity to continue uplifting our people even farther.”

The call came in from a Connecticut congressman’s office: an aide described how much Congressman Luis Gutiérrez means to his office — how the issues Gutiérrez fights for are close to this politician’s heart. Our event at Real Ways, an open interview with Congressman Gutierrez led by WNPR’s John Dankosky, was quickly approaching, and we wanted to make sure the word was spread. ‘Can I send you more information?’ I asked the aide. “I’m all set, we’ve received 6 emails about it from various immigration reform groups in the area.”

Congressman Gutierrez being in Hartford was big news, his presence and his message important to many. Half an hour before the event began our space overflowed with young families. It was a crowd we don’t have the privilege to see enough of here; they came for the congressman—he came for them—and as they took their seats the energy in our space was palpable.

Real Art Ways is situated in the Parkville neighborhood of Hartford, a culturally diverse area with a significant Puerto Rican population. It was enlivening to welcome our neighbors in this way, to present a leader who fights to bring the issues that matter to us to the national stage.

And then the phone rang.

Halfway through the event several audience members began to stir with excitement. Congressman Gutierrez, a champion of Puerto Rican self-determination, opened the evening by calling for the release of Oscar Lopez Rivera, a Puerto Rican Nationalist and political prisoner serving a 70 year sentence for a nonviolent crime. And then – right in the middle of the interview – Oscar was calling in! We’d like to believe it was all preordained, and given the magic of the evening, who’s to say it wasn’t?