Open Letter to the President (re: A Pardon for Oscar López Rivera) 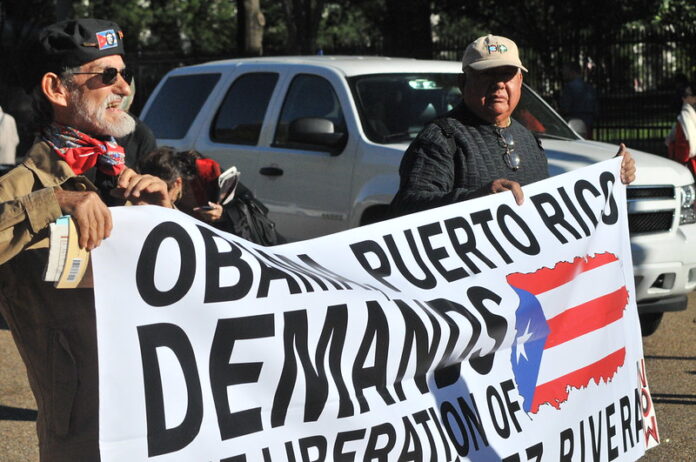 Here in Puerto Rico, your lunch with now Governor Alejandro Garcia Padilla is commemorated by way of a small plaque on the table in the restaurant where you paid cash for a sandwich in a button-down white shirt with the sleeves rolled up. I presume that the restaurant owners placed the plaque there because customers might want to sit at the same table where the President of the United States ate a sandwich—they might even want to have their picture taken there. They’re probably right: people often enjoy imbuing everyday activities with historical significance, even when the historical event in question here was not all that significant, not when compared to the kinds of things that usually make up the history of nations and so forth. Several months after you left, the island government unveiled a statue of you across the street from the Capitol building in San Juan, next to statues of all the other Presidents who had visited Puerto Rico during the history of American colonial rule over the island. They’re not that many. And there’s no record of what they ate, I don’t think.

I share this because, like so many here, I have a somewhat distorted notion of history and of the events that comprise it. For example, I know that you are the 44thPresident of the U.S. and that you were first sworn into office on January 20, 2009. I know this because I turned 30 years old that day and was standing in a crowd of hundreds of thousands in Washington D.C, overwhelmed by the sight of you on the big screen approaching the podium to address the crowd as President for the very first time. I remember thinking “this is historic,” and I even managed to convince myself that, although I had stood in the middle of a crowd before, that particular occasion was significant. To commemorate it, I bought and kept a copy of the New York Times. However, by the time you made your first visit to Puerto Rico in June 2011, I, as perhaps others around the world, was already significantly underwhelmed by the moral character of your presidency. I sometimes wonder whether it will be those feelings of deception, disillusion and supreme disappointment experienced by millions that will define you historically. Sometimes I hope so. Sometimes I hope not.

Anyway, I’m writing because this past Saturday, I was standing in the middle of a crowd of tens of thousands in front of the Federal Court Building in San Juan, and I was overwhelmed by the sight of so many diverse groups of people set to march through the city to demand the liberation of Oscar López Rivera, who has served more than 32 years in federal prison for conspiring to oppose U.S. authority by force. At present, he is the longest held political prisoner in America, although he was never convicted of directly harming anybody. During his incarceration he has been subjected to behavioral modification programs, kept in isolation. He is 70 years old, has a daughter and a granddaughter whom he met through the glass in a prison visiting room. He deserves to be back home. To be honest, on January 20, 2009, I was unaware of the particulars of Mr. López Rivera’s incarceration. I was aware, of course, of the historical struggle in Puerto Rico for independence from the U.S., and of the many men and women who have been imprisoned by the federal government throughout the history of U.S. colonial rule over the island for attempting to liberate our country—an at once beautiful and nefarious legacy, no doubt. This notwithstanding, it was your name (and not Oscar’s) that I learned to say first, as an affirmation of hope for more progressive politics, individual liberties and social justice—an unfortunate but typical effect of colonialism, no doubt. Thankfully, I don’t say it that way any longer. Instead, I write down the name OSCAR in big, black letters on a poster board and, like thousands upon thousands inside and outside the island, I hope against all odds that you pay attention to a place where people are expected to pay you homage simply because you dropped by and ate a sandwich. I’m writing because I, like so many of us here, would like to have Mr. López Rivera back on the island so we could run into him casually at lunch time and have the opportunity to shake his hand and thank him for doing something as significant as fighting for the liberation of his country and enduring so many years in prison, all the while giving us hope for more progressive politics, individual liberties and social justice. But I digress.

This is just to say that your lunch here in June 2011, is not significant. Nor is your statue, really, as it does not commemorate anything historic you might have done here. People do insignificant things every day, even Presidents. It’s a historical fact. Some facts, however, stand out more than others. The fact that Oscar López Rivera has spent the last three plus decades in prison stands out the most around these parts. Over the last three plus decades, five different Presidents have been sworn into office. I wonder if it would be possible for you to consider standing out amongst them. I wonder if you would be interested in imbuing your presidency with historical significance in the form of a direct action to assuage this injustice perpetrated by the American government. I wonder if you would be interested in affirming the fundamental American principle of freedom and grant a pardon to Mr. López Rivera. I really hope so. At all times.

On Saturday, students at the march were chanting in unison: “Obama can’t talk about freedom, if he keeps brother Oscar incarcerated.” Thousands upon thousands agreed. And now I am tempted to ask, can you?