Generation L, a program of Vida/SIDA, is a Latin@ youth program for gay, bisexual and questioning men and transgender women. Generation L is focused on community-building and our members develop creative, fun ways to talk about how hot safer sex is! We hold social events, engage in community education and outreach, and provide a safe and identity-affirming space for other queer youth. Please join us at a meeting or event! 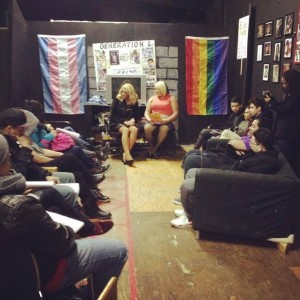 Mission: We Lead with Loyalty and a Loud voice to those who are Lost. We Live to Learn and Laugh with Love. With a passion for Liberty, we are Generation L.

Background info: Generation L started in August of 2010 and it ran until June 30th, 2014. Generation L is the name the youth gave to the Evidence Based Intervention “MPOWERMENT” that is supported by the CDC as an effective intervention. From July 1st, 2010 through June 30th, 2015, the grant was funded by CDC. The intervention itself ran from October 2010 through June 2014 but the last year of Mpowerment (July 1st, 2014-June 30th,2015) was just focused on HIV testing itself. Our original target population was Latino MSM and Latina transwomen ages 18 through 24.

Generation L is currently being funded by SAMHSA and the grant years are from September 2015 through August 2020. We are re-launching Generation L with a few changes. The new target population is Latino MSM & Latina transgender women ages 13 through 24.

Generation L has participated in many events including: Chicago Pride Parade, Puerto Rican Parade, March on Springfield for Marriage Equality, rallies in Illinois for marriage equality, immigration rallies and protests, Queer Prom, United Latino Pride, and many LGBTQ events all across Chicago. Generation l has also been able to host safer sex workshops where youth learn about way to prevent hIV or ways to prevent from spreading it to others, sexual relationships, self expression, sexual behaviors, and risky behaviors. It is through these safer sex workshops (referred to as “Just The Tip” or “Between The Sheets” or “What’s the T”) that we were able to reach our numbers for the grant. Special guest facilitators have included drag queen performers from Rupaul’s Drag Race including: Jessica Wild, Gia Gunn, Jade Sotomayor, and Naysha Lopez. Generation l has also been able to have discussion nights that talked about transphobia, gender identity, coming out of the closet in the Latino community, homelessness, career workshops, immigration, living with HIV, and many other topics that directly affects the LGBTQ community of Chicago. Generation L has also been able to host community events such as a fashion show, thanksgiving dinners, Christmas parties, BBQ’s at the park, beach days, and many other fun events.