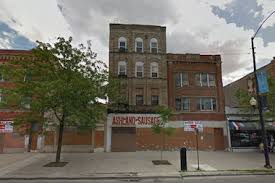 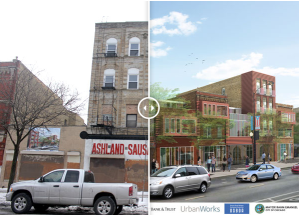 After years of planning, the Puerto Rican Cultural Center announced last week that new development on the 2700 block of West Division Street will seek to revitalize the area and usher in new economic development.

The newly named Paseo Boricua Arts Building will move into the long since abandoned buildings at Division Street where the Ashland Sausage Company was once located. The buildings will receive an entire refurbishing and an updated facade.

“For a decade, this site, which housed the Ashland Sausage Company, sat vacant. The only activity it saw was gang graffiti going up on its walls and the city’s graffiti blasters taking it down,” said Ald. Roberto Maldonado at the unveiling last week. “But thanks to [PRCC Executive Director] Jose Lopez’s vision, this building will be re-imagined, reinvented, and revitalized as a place for local artists to live and create.”

According to the PRCC, a performance theater that seats close to 100 people, an art gallery and residences that offer artists both a place to live and a commercial studio are some of the highlights of the new development.

“It’s really going to complement the infrastructure we already have in the neighborhood,” said Executive Director of the Division Street Business Development Association Eduardo Arocho.

The work and live residencies are part of something that Arocho has planned for years, he said.

And like many grand ideas, it started off as just a dream, he said.

Years ago when he first moved to Chicago, Arocho walked around the Five Corners and peered through art gallery windows on Division Street. An artist and poet himself, he admired the artists’ work in the neighborhood, he said.

But where did the artists go and live? That’s when the idea took shape, a concept to provide both residences for artists and their families while still offering them commercial space and a studio, all in the same building.

Arocho started to work towards the goal in 2004 and after years of lobbying and looking for investors, the PRCC stepped in and lent him a helping hand, he said.

The seven buildings that make up the new development were purchased by the PRCC for $2.5 million on a loan from the Belmont Bank, according to Arocho.

The plans themselves, although still in development by Brinshore Development, LLC, and UrbanWorks Architecture, is set to offer 15 residencies on the property. The apartments will range from traditional one and two-bedroom apartments with all the amenities that go with them, according to Arocho.

So far about 20 artists applied for residency in the new building, Arocho said. Artists who apply for the residency also have to submit a business plan.

But the idea isn’t just to have the artists live and work in the building but to also educate them by providing business classes to the residents to help the building and neighborhood become more self-sustainable.

“As you know, Humboldt Park is in transition. In 2014, the online real estate brokerage Redfin projected that Humboldt Park would be one of the 10 hottest neighborhoods in the country,” said Ald. Maldonado. He added the median house price has jumped 42 percent over the last year to $260,000 and that these prices are driving local artists out of the community.

Arocho estimates that the plans will cost $12 million more to refurbish the buildings and bring them up to code. Of the seven buildings purchased by the PRCC, six will be renovated and one demolished entirely, he said.

Arocho and the DSBDA hope to raise the rest of the money through investors and contributions, he said. Should all go well, Arocho expects to start construction in early 2016.

“I’m very excited. It will serve to help activate and maintain as a great attraction to the businesses in the area,” he said.