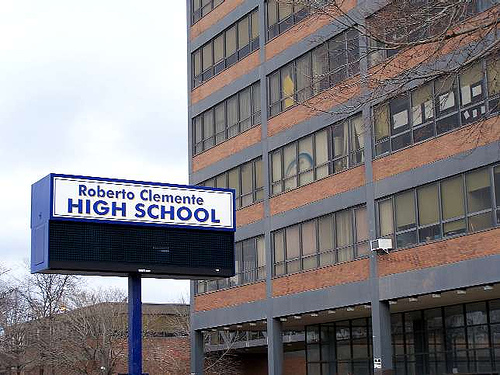 Also addressing the media and the crowd in attendance were Jose Rico of United Way, Sybil Madison Boyd of the Digital Youth Network at De Paul University, and Matthew Summy of Comcast, all important partners working in collaboration with CPS, the PRCC, and the Parent University at Clemente. Also presiding over the event was Clemente principal Marcey Sorenson, without whom the Parent University at Clemente would not be able to function.

In addition, as the inauguration of the very first Parent University in the city was getting set to begin, guests were served delicious hors d’oeuvres made by Clemente students participating in Clemente’s amazing culinary arts program. While guests tasted the delicacies made by Clemente students, they were also treated to a feast of the eyes. In addition, to the beautifully presented photos of Safe Passage parent participants, Puerto Rican art from the Center for Puerto Rican Studies and from the Hunter College art collection were on display.

As the very first program of it’s kind, Humboldt Park’s Clemente Community Academy’s Parent University is a remarkable model. Married to the Safe Passage Program at Clemente and Wells High School, and founded on the concept of community as a campus and in tandem with the Parent Popular Initiative, it is sure to be a model followed by other educational institutions and community organizations across Chicago and beyond.