Stand Up For Puerto Rico, an organization run by young Puerto Ricans, reiterates its demand to the Federal Executive Branch to take responsibility over the Island’s severe fiscal crisis.
“With the visit of Treasury Secretary, Jacob Lew, this past week in Puerto Rico, we reiterate our demand to President Obama to take executive action and address the fiscal crisis on the Island.  The Treasury Department, for example, should intervene with the bondholders to try to find a way to restructure the debt”, said Alejandro Manzanares, director and founder of Stand Up For Puerto Rico.
According to Manzanares, the President can take executive action without Congressional backing, but the Obama administration has not taken meaningful action for Puerto Rico.
“We also call on Governor Alejandro Garcia Padilla to echo our demands, which are shared by other officials and organizations such as: National Hispanic Leadership Agenda, National Puerto Rican Coalition, Hispanic Federation, Jubilee USA, among others”, said Manzanares.
Stand Up For Puerto Rico is a civil rights movement that urges the Government of the United States of America to accept its responsibility over Puerto Rico’s economic, social, and political conditions that have been neglected and affect the 3.5 million U.S. citizens of Puerto Rico. Using social media as the main platform, Stand Up For Puerto Rico’s mission is to educate and elevate the conversation within the United States and engage our leaders on matters that have not yet been addressed in order to establish an economic and social plan for a prosperous Puerto Rico.
“We invite all Puerto Ricans, friends, allies, and supporters to use the hashtag #StandUpForPuertoRico in social media and demand Executive Action.  The island is facing a critical time and we need to act now before it is too late”, concluded Manzanares.
###
About Stand Up For Puerto Rico
Stand Up for Puerto Rico is a non-profit, non-partisan organization whose mission is to engage and build up the voice of Puerto Ricans.  Our goal is to promote action by raising awareness on the issues that affect the lives of 3.5 million U.S. citizens.  It is a civil-rights movement powered by social media, through which all voices can be heard.  For more information visitwww.StandUpForPuertoRico.org.
Facebook: www.facebook.com/standupforpuertorico
Twitter: www.twitter.com/StandUpforPR 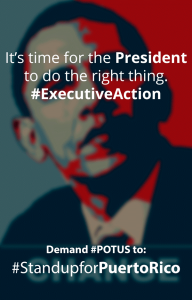