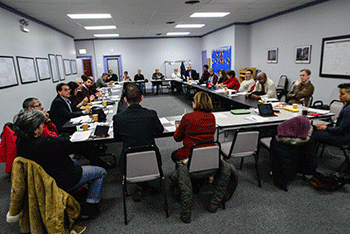 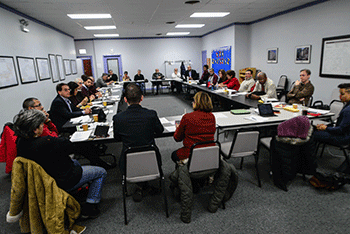 As a follow up to the November convening with CHA CEO Eugene Jones, over 30 Puerto Rican Agenda members, Aldermen Proco Joe Moreno and Milagros Santiago continued to press the second largest public housing authority in the United States for concrete steps and a timeline to remedy the dismal Latino participation rates and representation in all facets of the entity last Saturday, February 6. The discussion comes on the heels of a unprecedented turnout for a community hearing earlier on the week with over 200 stakeholders regarding the future of Lathrop Homes and will lead up to a historic City Council hearing next Wednesday, February 17, on the “Keeping the Promise” ordinance ensuring greater accountability and transparency in the CHA.
In addition to discussing strategies to address the affordable housing crisis, Agenda members were briefed on the upcoming Local School Council (LSC) elections on April 13 and 14, 2016 and the importance of a significant community turnout. LSCs are site-based school management teams comprised of locally elected parents, community members, and teachers charged with principal selection and evaluation and approving the school budget and improvement plan. 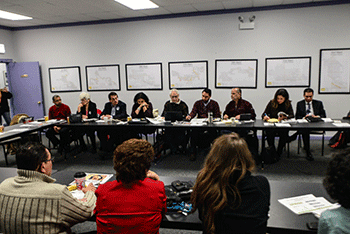 Lastly, the Agenda secured commitments from community leaders to mobilize the base to attend an upcoming charla/forum on Friday, March 4, 2016 at ASPIRA High School (2989 N. Milwaukee) starting at 7:00 p.m. with Congressman Luis Gutierrez and Chicago Puerto Rican elected officials on:
-Puerto Rico’s Fiscal Crisis;
-Campaign to release the longest held Political Prisoner in the history of Latin America-US relations, Oscar Lopez Rivera;
-National Puerto Rican Agenda; and
-2016 Democratic National Convention
Join us for this critical conversation regarding the future of the Puerto Rican diaspora. Confirm your participation here. Space is limited.