by Ana M. López, NYC Coordinator to Free Oscar López
Be like a “pebble in the shoe” and “business is not as usual” were the comments heard and what described the intensity of our discussion in the 3rd National Meeting to Free Oscar López Rivera on January 30th, 2016.  “Extreme urgency” is the call to secure Oscar’s release this year and the development of a strategy for the next 11 months.  After postponing the national meeting the week before due to the 30 inch snow blizzard that struck the East coast, we regrouped and a good number of persons attended this meeting held in the heart of the South Bronx. There was representation of 10 cities from East to West coasts and Midwest and East coast. We had a long agenda and fruitful discussion and brainstorming session about what we needed to do to “Bring Oscar López Rivera Home, at last!
At the National meeting we stared with a general discussion and an overview of the great accomplishments of the campaign to free Oscar, thus far. The narrative on Oscar from being completely an isolated issue and “invisible” to a popular one (hero, nationalist leader, independence fighter, political prisoner, etc.) not only in Puerto Rico, Latin American and international arenas, but reaching USA mainstream. The year 2015 accomplished the changing of the narrative on Oscar Lopez Rivera in New York City and neutralizing the right wing forces.  This was accomplished against all odds and propelled the visibility of his release on a humanitarian level bringing together on many fronts: labor, faith community, student populations, community organizations and elected officials (as never before) with unity “One Voice for Oscar”. 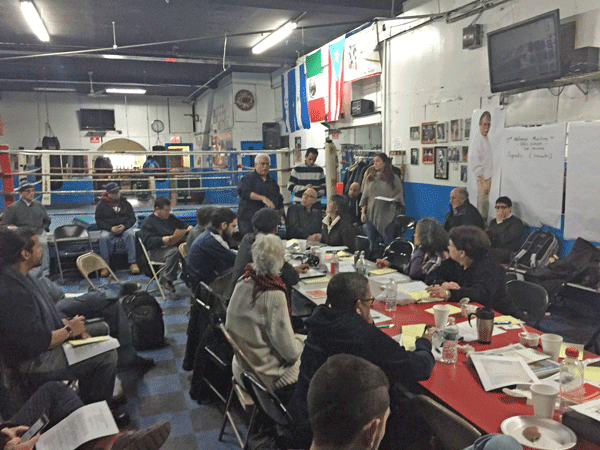