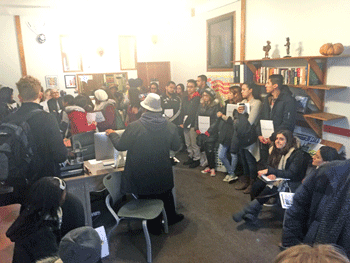 The open house, attended by almost 100 participants, began with a mix of university students from Northeastern Illinois University, Columbia College Chicago, Associated Colleges of the Midwest, and the University of Illinois at Chicago, all gathering at El Rescate, the transitional living program of 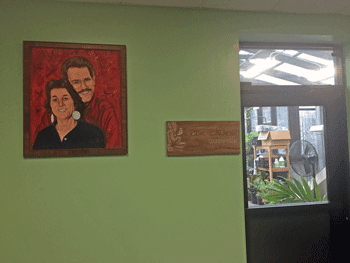 the PRCC, which provides identity-affirming housing to homeless LGBTQ youth. At El Rescate, executive director of the PRCC José E. Lopez spoke to the crowd about the award-winning work done in the community by the staff at El Rescate. Visit  http://elrescatechicago.org/ for more information.
After the conversation at El Rescate with Professor Lopez, the 100×35+8 open house tour of Paseo Boricua continued with a tour of the Dr. Pedro Albizu Campos High School (PACHS). Principal Danette Sokacich spoke to the participants of the open house about her own journey at Dr. Pedro Albizu Campos High School as well as about topics such as drop out rates for Puerto Rican high school students in Chicago, putting into practice restorative justice techniques, and much more.  At this time the open house continued with 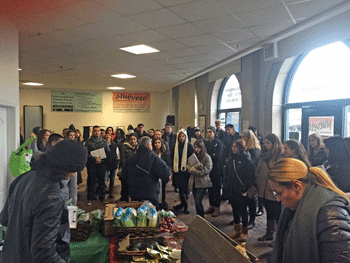 the unveiling of Oscar Lopez-Rivera’s painting of Chicago activists and PACHS supporters Steven Whitman and Nancy Kurshan, which he painted at the United States Penitentiary at Terre Haute. The painting was unveiled in the Dr. Pedro Albizu Campos high school’s greenhouse, which was named after Steven Whitman in memoriam, and where the painting will be kept on display. Oscar Lopez-Rivera, who was one of the co-founders of the Dr. Pedro Albizu Campos High school, as well as many other important programs and initiatives serving the Puerto Rican Community in Humboldt Park, is currently the longest held Puerto Rican political prisoner in the history of the United States. Visit http://www.boricuahumanrights.org for more information on his life and activism and help to free Oscar Lopez-Rivera now!

After attending the unveiling of the painting in the greenhouse of the PACHS, the participants of the open house were treated to a delicious meal of Puerto Rican food provided by Nellies Puerto Rican restaurant located in the heart of Paseo Boricua on Division Street. Everyone was then invited to the newly renovated space at Batey Urbano, which houses the Urban Theatre Company in its tenth anniversary season. The participants were treated to a free showing of the currently running play, Adoration of the Old Woman, written by renowned Puerto Rican playwright José Rivera. The PRCC’s 100×35+8 open house events concluded with this moving performance, and by the end many audience members were in tears. For more information on the current run of Adoration of the Old Woman or for tickets go online to www.urbantheaterchicago.org
Artículo anteriorEl Rescate! Tickets Available Now!
Artículo siguienteWhere to Locate and Download Google Form Add-ons