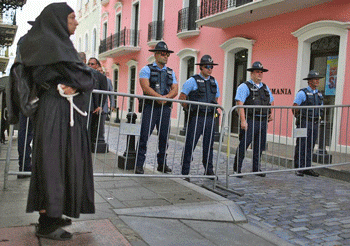 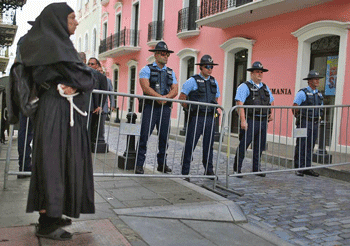 FOR NEARLY FOUR decades, Puerto Rico’s police force illegally surveilled, tracked, and documented the lives of islanders sympathetic to the cause of independence from the United States. Late last year, authorities began releasing the last 4,000 surveillance files compiled between 1948 and 1986, in what constituted one of the most scandalous cases of government repression ever seen in a US jurisdiction.
Another 3,000 files had been released just previously and are now in the process of being organized. Together, these 7,000 files have gone unclaimed by their owners since 1998, when a court order was issued forcing the police to turn them over, unredacted and in their entirety, to the citizens who had been watched and followed. All the files are now available at the General Archives in San Juan.
The turnover of these carpetas takes place at a moment of increasing historical and political complexity for Puerto Rico, given the financial insolvency of this unincorporated territory of the United States. Earlier this week, the US Supreme Court heard the second of two cases related to the island’s political condition. The insular government has an unpaid public debt of over $72 billion and claims that public money will run out in May, while its creditors, among whom are several hedge funds, are rushing to court to collect their part of it – a process that could take years, if Congress fails to act on the matter.
At risk is potentially the largest default ever to occur in the municipal bond market in the United States. The situation has no legal precedent, given that the Puerto Rican government is not fully covered by the laws that apply to the states of the union. The amount in question – which does not contemplate the insolvency of the government retirement and public-health systems – is much greater than the per-capita indebtedness (the debt ratio) of states like Texas and California.