San Juan Mayor Carmen Yulín Cruz has been one of the fiercest critics of the federal government’s response to Hurricane Maria, notably saying “I am mad as hell” in the weeks following the storm that devastated Puerto Rico in September 2017.

In a recent keynote address at the University of Illinois-Chicago, Cruz indicated that although conditions have improved slightly over the past seven months, “today between 75,000 and 100,000 Puerto Ricans still don’t have electricity.”

Cruz also said 500,000 roofs must be partially or totally rebuilt and that the island’s suicide rate has gone up 55 percent. A lot of the discontent stems from a controversial fiscal control board, authorized by President Obama in 2016, to handle the territory’s $123 billion privately-held debt.

“When people ask me, I often say, ‘We were in the midst of hell,’” Cruz told Worldview host Jerome McDonnell in an exclusive interview taped shortly after her address. “Now we’re at the gates of hell. It’s a little better, but it’s still hell.”

“If anybody had any doubt before [the hurricane], it should be a foregone conclusion that Puerto Rico, as a territory, is a colony of the United States,” said Cruz of the fiscal control board in her address.

McDonnell and Cruz discussed the various responses to the hurricane, the rise of “disaster gentrification,” and the question of Puerto Rico’s sovereignty. Below are highlights from the conversation.

“Disaster gentrification” in the wake of Hurricane Maria

Jerome McDonnell: One of the things that was really striking in what you said Friday was there were 500,000 people who’ve left since the hurricane, and 500 millionaires who’ve moved in. You’ve got disaster gentrification going on. What do you do about that? On the one hand you’ve got some people with money coming in, but they’re really coming in, buying cheap, and pushing people out.

Mayor Carmen Yulín Cruz: Well, and the one thing is you have entrepreneurs and millionaires that are cognizant of the fact that they must have social consciousness. We have one in San Juan, Nick Prouty, that is an example of how to respect the laws and how to really insert yourself. He moved his family into Puerto Rico. …

What we saw start to happen in San Juan is that some of them would buy separate plots of land off people that had to leave Puerto Rico because they had to look for a better health situation, or the elderly, who had to move in with their children. …

But it is as you said, and at some point in time I said — and I was heavily criticized by some of the Fox News and such by using the term, they were more concerned about the term than about the actual thing that led me to say this — that if we didn’t get the help we were supposed to get, this was going to amount to something similar to a genocide.

So now what we’re seeing is the prospect of gentrification and what others call “cleansing” in the midst of disaster economics, which has been aided by the central government of Puerto Rico. They say they don’t agree with the fiscal control board and the reduction in pensions, but just a few weeks ago the governor put forth what he called a labor reform. It wasn’t a labor reform. It was a “let’s take away from the labor movement, all the rights that they have.”

But now, lo and behold, the fiscal control board puts that exactly back to the fiscal plan. So there seems to be this cat and mouse situation going on, but frankly the credibility of the central government is really, really in shambles. 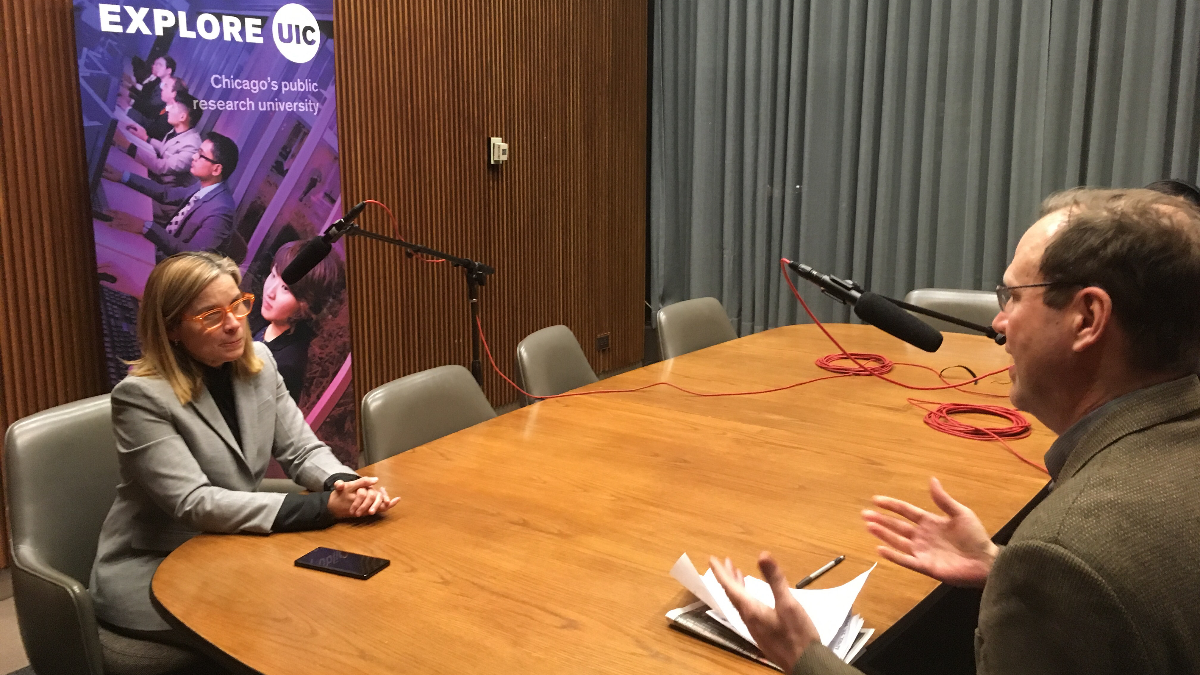 San Juan Mayor Carmen Yulín Cruz spoke with Worldview host Jerome McDonnell after her keynote address at the University of Illinois at Chicago on Friday, April 20, 2018. (Courtesy of UIC)

On the hurricane response from average citizens

McDonnell: Do you think the game has changed on the status of Puerto Rico with people on the mainland? Do you think there is a different conversation people are having now?

Cruz: I don’t call it the mainland because that would make me the second land. So we often draw that distinction. But yes, there is. The American people have been wonderful. They’ve opened their hearts. They’ve left their homes to help us.

On the hurricane response from Chicagoans

Cruz: The people of the Puerto Rican agenda — Rahm Emanuel, Luis Gutierrez, Chuy Garcia, and so many others — got there five days after the hurricane. They called United Airlines and United got a plane down there. The U.S. couldn’t get planes but United got a plane down there. And they gave us our first 75,000 pounds of food. So the people of Chicago saved lives. Really, they saved lives. And for that — as a human, as a Puerto Rican, as a mayor — I will forever be grateful. 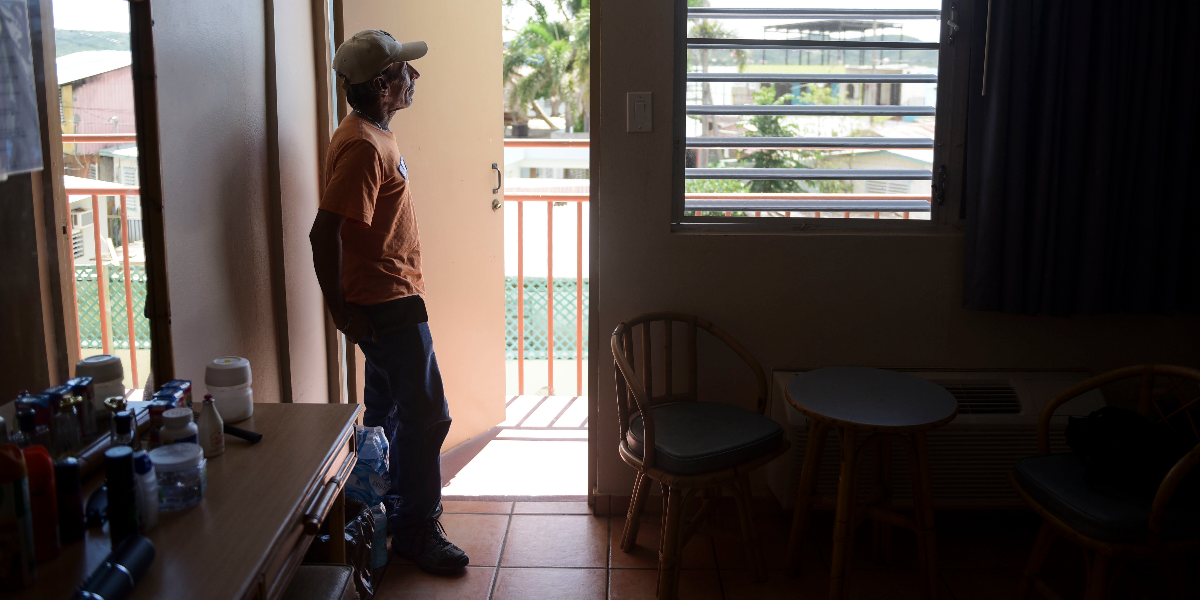 In this Feb. 26, 2018 photo, 53-year-old retiree Fernando Muniz looks out from his hotel room, where he has taken refuge for months after Hurricane Maria caused damage to his San Juan residence, in Cabo Rojo, Puerto Rico. (AP Photo/Carlos Giusti).

Determining what’s next for Puerto Rico

Cruz: There’s a part of Puerto Rico that wants to be a state. Some want to be independent. Some want to enhance commonwealth outside of the territorial clause. And some, like me, want free association with a dual citizenship. … What I ask people, rather than pushing my own agenda, push a more democratic agenda. Let’s look at the process. Marry the process. Don’t marry the result. Because the minute somebody says I’m pro-independence, or statehood, or free-association, or enhanced commonwealth outside of the territory clause, usually the process that they aspire to just shifts the deck a little bit in favor of that result.

So what we are proposing, and there is vast support in Puerto Rico for this, is a process of what we call a constitutional assembly where we know exactly what statehood would look like and when we will get it. What would independence look like and when we would get it. What would enhanced commonwealth outside of the territorial clause look like, and what would free-association look like with a dual citizenship. And then have a process of education. And then let Puerto Ricans decide, and make sure that the United States commits to the will of the people of Puerto Rico. That could go either way.

This interview has been edited for clarity and brevity. Click here to listen to the entire interview, which was adapted for the web by digital producer Justin Bull.