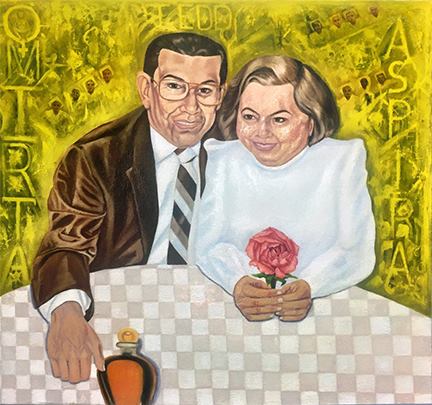 I had the honor of meeting Mirta in the late ’60’s. It was during a community meeting that had been organized to deal with the issue of getting a new H.S. built to replace Tuley H.S. A friend introduced her to me emphasizing she was the person responsible for bringing ASPIRA to Chicago. I knew nothing about ASPIRA, but she ha already impressed me because a few minutes before when she told the audience to focus on the need to confront the Chicago Board of Education and School Superintendent Redmond if they wanted a new H.S. built. I asked her what she thought young Puerto Ricans should be doing to help with the issue of building a new school.  Her response was for us to start organizing in the community.  i was encouraged by her answer because I was trying to do some community organizing.

A few weeks after I met Teddy Ramirez at Puesto Boricua – a spot on Division St. where veterans gather to talk, play dominoes and once a month celebrate a dancing activity. Mirta was with him. We talked for a few hours about the community, shared ideas and discussed city politics and what party Puerto Ricans should endorse. And after that we became good friends. I would visit their house, talk with Hector and play with Ziqui.

Mirta at that time was an active member of the NCO Board and one of their key fundraisers. One day she told me there was an opening for a community organizer at NCO and that I should ask for the job.  At first I was reluctant, but she pushed me and finally I took the job.   NCO at the time was going through a transition period and a new director was hired.  The new director was Shel Trapp. He reorganized the whole operation and one of our first victories was to get the Board of Education to approve the construction of the new H.S. We worked hard and Mirta kept on encouraging me to continue working. We waged struggles against many companies that were discriminating against Latinos such as Illinois Bell and the Construction Industry. We created the Spanish Coalition for Jobs and scored big victories.  But after a few years I felt a need to leave NCO. Mirta thought it was a bad decision.  But I went to PR to see if I could do some organizing there. But after a few months I had to come back to Chicago.

As soon as I came back Mirta asked me to take over a project she had raised funds for.  She has secured a desk and a phone at Rev. Torres storefront church. And from there we renewed the efforts to open the Puerto Rican HS, and it was completed very fast.  We took on the University of Illinois -Chicago Circle and also got Lares started and the Rafael Cintrón Center.  We got rid off Dr. Fink as Tuley HS principal. But Mirta and Teddy moved to Schaumberg and she was less active.  In 1974 we decided to take over Association House and the first night we were there 39 people were arrested including Mirta. The next morning, after they had been bailed out Mirta started blaming me for the fiasco.  She said she wasn’t going to continue working with us.  And after that we never worked together again. I had my reasons for not asking her to come back.  While in prison I always hoped she had understood why I did what I did, and that some day Teddy< Mirta and I would be able to talk and be as good friends as we had been before. I called Teddy last year to see how Mirta was doing.  And he told me how bad her health was.

What I hope most is that people in Chicago will always remember the great contributions she made to our community and to the whole city and that her legacy will never be forgotten.