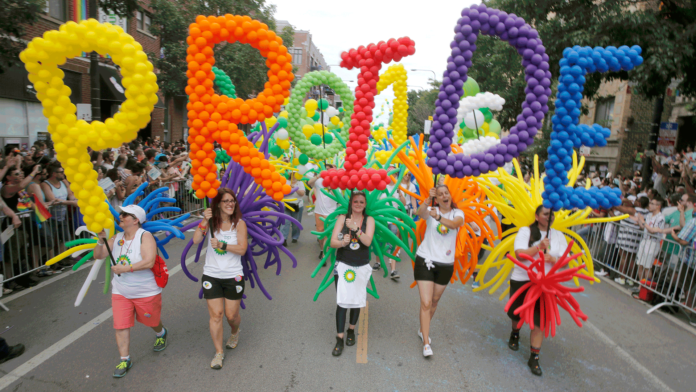 Chicago’s Pride Parade is marching this Sunday in its 49th year. The parade looks back at its history for the theme, “Remember the past, create the future.” It is the culmination of a month of events planned to honor and celebrate Chicago’s lesbian, gay, bisexual, transgender and questioning or queer (LGBTQ) community.

CTA rail: Spectators can access the parade from several CTA stations, including Wilson and Sheridan. The Belmont station and the area around it tends to become the most crowded. The Red and Brown Lines provide the closest service to the parade route, according to the CTA.

CTA bus: Several CTA bus routes will be rerouted due to the parade including 8 Halsted, 22 Clark, 36 Broadway, 76 Diversey, 77 Belmont, 78 Montrose, 151 Sheridan and 152 Addison. Here’s where to find updated information.

Metra: Here’s where to find the schedules for Metra’s Union Pacific and BNSF lines on June 24.

Parking: Parking restrictions along the parade route and the surrounding area will be in place starting early June 24 on Halsted Street and Belmont Avenue.

Cruz, who has won four world boxing titles and competed for Puerto Rico in the 2000 Summer Olympics in Sydney, Australia, came out on Oct. 3, 2012, when he was the No. 4-ranked featherweight by the WBO.

(Only registered parade participants, police officers and other city officials, security staff, parade marshals and credentialed media will be allowed in the street during the parade.)

Why are gay rights celebrated in June?

Former President Barack Obama designated a 7.7-acre area — including the tavern and a small park across the street — the first national monument to gay rights in 2016.

First American gay-rights group founded here: In 1924, postal clerk Henry Gerber formed the Society for Human Rights. He was soon arrested for being gay. He was never convicted, but the publicity (including a newspaper headline reading “Strange Sex Cult Exposed”) led to his firing for conduct unbecoming a postal worker. The group quickly disbanded. In 2015, Gerber’s home at 1710 N. Crilly Court in the Old Town Triangle neighborhood was designated a National Historic Landmark.

First Gay Pride Parade in the U.S.: More a march than a parade, the city’s Gay Liberation Movement staged its first rally and procession as part of Gay Pride Week on June 27, 1970. A short Tribune story the next day said 150 people listened to speakers in Bughouse Square (now Washington Square Park) before walking to the Civic Center (now Daley Plaza) where they formed a chain around the Picasso statue and shouted, “Gay power to gay people.”

Chicago’s march preceded parades in New York City, Los Angeles and other cities by one day.