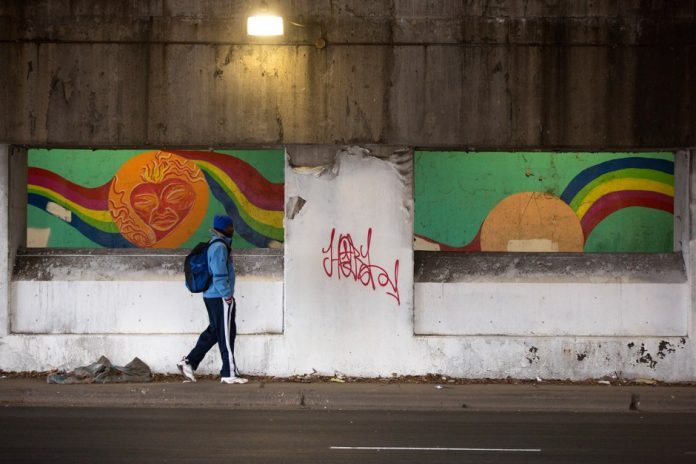 A new report offers a roadmap to inclusive growth.

By 2030, Chicago will seem like a citadel of concentrated wealth. Estimates indicate that its white population will increase by 14 percent, and rich households making over $125,000 will grow by a striking 42 percent. Meanwhile, it is predicted that its black population will drop by 17 percent—to the lowest level since the 1950s. The surrounding suburbs are forecasted to see a 44 percent increase in Latinos, and a 12 percent growth in households making under $30,000.Currently the population of Chicago is approximately a third white, a third Latino, a third black, and fewer than 10 percent other races and ethnicities, but intensely segregated. And this shift will be a further re-segregation of Chicago—white flight, in reverse. That’s the grim forecast in a new report by the Urban Institute and the Chicago-based Metropolitan Planning Council (MPC). But the good news is, it’s still avoidable. The MPC, after consulting with numerous local stakeholders, has presented a detailed plan to dismantle the current patterns of concentrated poverty and wealth, and pave the path towards inclusive growth.
“In the past, the debate about segregation would happen in certain rooms and a discussion about the lack of economic vitality would happen in separate rooms,” said MPC’s MarySue Barrett. “Rarely would the concept of our sidelining of large portions of our population have anything to do with [the latter], but we drew those two areas of focus together.”The big picture prescription for the city’s ills: take a critical look at every policy, process, practice, and law at the local level that might be perpetuating racial inequity—and correct for it.

But the report also offers specific policies to increase opportunity and options for residents living in historically disinvested neighborhoods, minimize the racial wealth gap, combat systemic racism, and improve health and safety. Improving access to affordable housing, according to the report, is a crucial step that helps achieve all these outcomes.

The recommendation that has been getting the strongest reaction so far is one that seeks to decrease local control over affordable housing decisions; in other words, combat NIMBYism. It asks that the Chicago’s aldermen not be allowed to reject or defer any development project that includes 10 percent or more affordable units in wards containing fewer than 10 percent affordable housing units. “It would bring sunshine to the process—the discussion that we all need to contribute to having choices in every neighborhood,” Barrett said, “and no one can opt out of that.”

The other big recommendation—to evaluate the impact of new development—is particularly timely. Last Thursday, the Chicago Plan Commission gave the green light to the Obama presidential library, after hours of emotional testimony from supporters, as well as protests from community groups who are concerned about how the project will be implemented. The biggest source of tension has been the Obama Foundation’s refusal to sign a Community Benefits Agreement (CBA) with local community organizations who are worried about displacement. According to the MPC, these local groups have a fair concern given the unintended consequences of other well-meaning projects in the city, like the 606 Trail—Chicago’s version of the High Line. The prices of real estate have climbed since the amenity was built, burdening nearby residents with higher rents and property taxes.“If the market is left to its own devices … we will see displacement, we will see a crowding out of the income mix that makes for a healthy, vibrant community,” Barrett said.

Renters make up almost half of the city, and some of the other recommendations address their needs. One demands 10-year tax incentives for property owners who agree to make a portion of their units affordable to households earning below 60 percent of the median income in the area. Another asks that Chicago’s housing voucher program be expanded so that it gives low-income families access to units that are at 200 percent of the area median rent, particularly in opportunity-rich areas of the city. “It’s not just about nice units in nicer neighborhoods,” said Barrett. “It’s where are those units located—that they’re located near amenities and jobs.

The rest of the recommendations include reforming the regressive property tax law, updating the homeownership support program in the city, and making sure that the required affordable units in new developments actually go to people who need them. While these are specific to Chicago, they offer examples of laws or programs that other cities dealing with the same problems may want to take a hard look at.This roadmap is a follow-up to an MPC jointly-authored report with the Urban Institute from 2017, which highlighted the billions of dollars and thousands of lives lost in Chicago because of racial and income segregation. That was a “wake-up call,” Barrett said.

“It was important for us to emphasize that [segregation] had an impact on all communities, on the collective economy, on the state’s fiscal health,” Barrett said. “And so while an individual may not experience the physical impacts of this separateness—if their life insulates them from it, from traveling through a poor community, or from interacting with with diverse communities—they still are deeply impacted by these structures that have been created over many, many decades.”