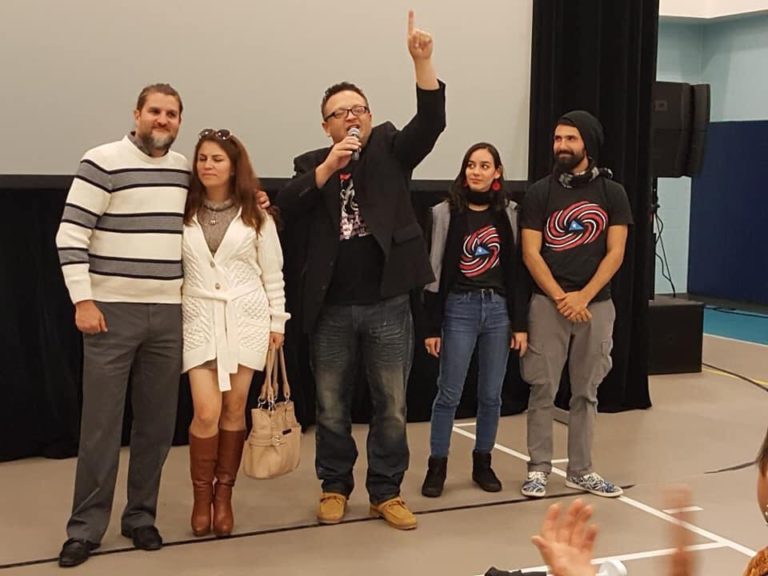 Chicago’s first Puerto Rican Film Festival debuted last month on October 13, 2018. Sponsored by the Puerto Rican Cultural Center and Aspira, it served as a fundraiser for the Puerto Rican Agenda of Chicago and its initiative — Rescue, Relief, and Rebuild the island. It is also known as the 3Rs4PR campaign. The film fest was took place at Aspira’s Business and Finance High School in Logan Square. The festival was well attended. All films were made in Puerto Rico, and range from feature to short films. The festival featured two headliners: Jurakán and La Cultura de la Ignorancia. Jurakán: Nation in Resistance documents the historical struggle of Puerto Rico — a Caribbean nation that refuses to disappear. The filmmakers,,Director Gonzalo Mazzini and Producer Rosa Emmnuelli Gutiérrez, both reside in Mexico. They joined us at our festival for their Chicago premiere. The married couple are touring the US tour and exhibiting their documentary. La Cultura de la Ignorancia explores the role the Puerto Rican voter in the economic disaster of the island. The director of the documentary, Paco Vázquez, joined us for the Chicago debut of his feature film. He currently resides in Texas. The third feature film, Mi Princesa, was written, directed, and produced by Chicago’s own, Carlos Jiménez Flores. It is a coming-of-age story about a young man who leaves Chicago to go to Puerto Rico for the first time to get to know his biological father, whom he had never met. In his journey he finds family, tradition, culture, love, and ultimately himself. The film is available online:www.vimeo.com/ondemand/miprincesa There was also a block of short films from the island. Skip Font, who is a writer/director/producer, offered two of his works. The horror film, Jessika, with a frightening ending and, 3000, a biopic about Roberto Clemente. He is currently filming his first feature film, Rémora, in Puerto Rico. The action drama includes Carlos Jiménez Flores as one of its producers. It is slated to be released in 2019. The other shorts included Otro Corto by Emmy Award Winner Heixan Robles, Fulano from Alejandra López, El Extraordinario Sr. Júpiter by Federico Torres, Hasta Que La Celda Nos Separe from sister/brother team Los Hermanos Emmanuelli, and Hasta Viejos by Carolina Seda. The success of the first Puerto Rican Film Festival ensures that this will be an annual event that will showcase cinematographic talent from our island.