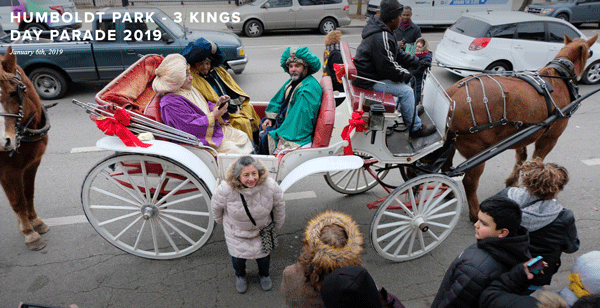 Within a festive, colorful and unique Puerto Rican experience, the Greater Humboldt Park Community celebrated its 25th Annual 3 Kings Day Festival/Parade on Paseo Boricua.  The festivities began at 3 pm on Division and Campbell, when the 3 Wise Men and Alderman Roberto Maldonado, on horse carriages, led a parade of hundreds upon hundreds of children and parents along the culturally vibrant Paseo Boricua, while hundreds more viewed from  sidewalks and cars. 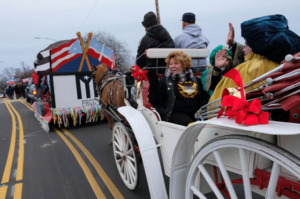 The Parade made its way to the Humboldt Park Field House where nearly 1,500 children were greeted by the Three Kings, and gifts were distributed by the members of Latin American Motorcycle Association (LAMA). Traditional Puerto Rican music, featuring Grupo Tumbao, delighted them. They were also able to savor the hot chocolate provided by Dark Matter Coffee. Additionally, two Puerto Rican artists, Roger Ramos and Luz Méndez, showcased their artisanry, and the Chicago School of Mosaics engaged many in piecing together a mosaic, which will be installed in Humacao, Puerto Rico in February. 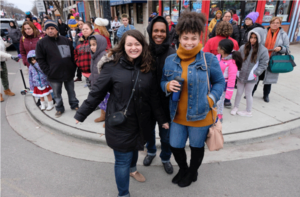 The Three Kings – who in the Puerto Rican tradition are known as Los Santos Reyes Magos – were represented by members of LAMA. This year, the role of Melchor was taken by Mario Nieves Aquino, International President of LAMA and recently named Honorary Chief in Nigeria.  In the Puerto Rican imaginary Melchor is the Black King who is the wisest of the three – because as they travelled side by side, he took his place in the middle, thus leading them, while following the star to the Epiphany (enlightenment).

The importance of the 3 wise men is so profound that after the US invasion of Puerto Rico, every school in Puerto Rico had to sponsor Santa Claus on Dec. 24 – so he became the gift giver thereby replacing the 3 Kings. 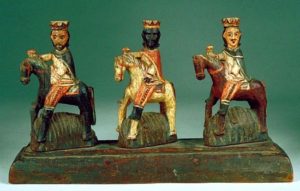 The Tres Santos Reyes Magos are deeply rooted in the Puerto Rican cultural imagination. Following the Spanish takeover of Borinken (as the native Taino people called the island), African slaves were brought to the island. Given the rich skills, which many African slaves brought as wood carvers from Africa, they soon became the master wood carvers (creating most of the figures in the Catholic Churches, and for the more popular home based nichos – altars). As they carved the figures, they had to learn the particularity of each saint. These santeros (saint carvers), in actual fact, created their own saints informed by their imagination; thus soon popularly dubbing the Three Wise Men as Los Santos Reyes Magos. The veneration for these wise men can be explained with the fact that the Africans brought to the Americas were denied the knowledge of their heritage. Soon, the only Black King they knew anything about was Melchor. The santeros began to depict the wise men with the following characteristics:  1) they rode on horses not camels;  2) they rode not just on any horses but Paso Fino horses (descendents of the Arabic/Moorish horses introduced by the Spanish Conquerors);  3) they rode side by side, and Melchor (the  Black King) was always placed in the middle – traditionally, any time three travel alongside each other, it is the one in the middle who leads – therefore, he was the wisest who followed the star of aurora , that guided them to the baby Jesus – to be enlightened (Epiphany). Melchor, the Black King, rode a white horse thus flipping the script of racism. 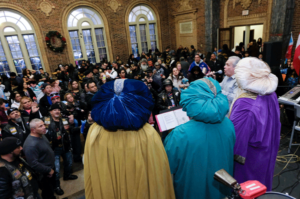 It is no wonder that for nearly 500 years, Puerto Ricans have venerated and honored Los Santos Reyes Magos on the 6th of January- with promesas (petitions), rosarios cantados (chanted rosaries), and celebrations, transforming this day into a truly spiritual and cultural legacy of the Island’s heritage. Furthermore, the children, following their own tradition, would place boxes with grass for the horses under their beds, and the next day they found gifts from the Magos.

It is within that rich cultural tradition that for the past 25 years Chicago’s Greater Humboldt Park Community has celebrated El Día de los Tres Santos Reyes Magos.