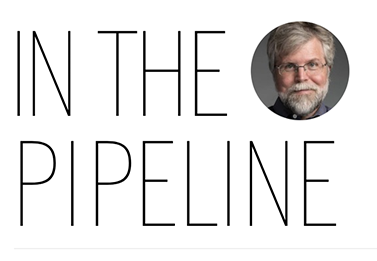 There’s quite a bit of confusion around the ACE proteins and coronavirus infection, and I can see why. The names in this area are pretty confusing, for one thing, and if you’re not familiar with the tangled feedback loops that you get in human biology, it all starts to look like a tangle of wires pretty quickly. So let’s have a look at the outlines of the system.

At right is a (pretty darn simplified) scheme. Angiotensinogen is a 452-amino-acid protein that’s secreted by the liver (and has several functions all by itself). Its first ten amino acids are cleaved off by the enzyme renin to give you Angiotensin-I (also known as proangiotensin). That small peptide is then made even smaller by angiotensin-converting enzyme 1 (ACE-1), and interestingly, no one’s ever found a function for angiotensin-1 other than to sit around and get cleaved in this way. This extra regulatory step has presumably come in handy over the eons.

ACE-1 takes off two more amino acids to give you the octapeptide known as angiotensin-II, and that one has profound effects on raising blood pressure (it has many other functions as well). It does this by binding to cell-surface proteins called angiotensin receptors (there’s more than one type of these and they have a whole list of other downstream functions, but that takes us further afield). So you can see how an ACE-1 inhibitor could be good for high blood pressure, by blocking any formation of angiotensin II, and a renin inhibitor would be as well, by blocking the whole process a bit further upstream, and something that blocked that last binding step (an antagonist of the angiotensin receptor) would also probably work. All three of those are in fact classes of hypertension drugs – the ACE-1 inhibitors came first (captopril in 1980, a famous triumph of 1970s med-chem and led to a whole slew of improved -opril drugs). The angiotensin receptor blockers came next (drugs with the -sartan suffix), and there are several of them. Renin inhibitors were far more painful to discover and develop, for a lot of reasons, and there’s still only one on the market (from 2007).

Now to the coronavirus connection. You’ll note that ACE-2 enzyme in the chart, and that one (formerly rather obscure) is having its moment in the the spotlight. It’s expressed near the surface of various epithelial cells – blood vessels, for sure, but also lung, intestine, and others. As shown, it is capable of clipping both angiotensin-I and angiotensin-II down further, to even small peptides (angiotensin 1-9 and 1-7) that have activities of their own. So it has its cardiovascular roles to play, but it’s become known for being a protein recognized by various coronaviruses to gain cell entry. There are others, naturally, and their relative importance can differ from virus to virus, but ACE-2 was shown to be important for the earlier SARS virus, and this current SARS-CoV-2 is quite similar. A cryo-EM structure of full-length ACE-2 with a coronovirus spike protein has recently appeared.

So something that binds to ACE2 and interferes with that viral hijacking would probably be quite interesting. Problem is, we don’t have much of anything like that. ACE-1 inhibitors, as fate would have it, are not inhibitors of ACE-2 – the enzymes are cousins, but not similar enough for the activity to cross over. It’s not completely clear to me if a small molecule inhibitor in the active site would interfere with the viral interaction anyway, and it would be nice to have a few to see, but I’m not aware of any such compounds. The confusion around the phrase “angiotensin receptors” has led to some people outside of the medical field wondering if the antagonist drugs (the sartans) would interfere with ACE-2, but that doesn’t happen, either (there’s another story with those, though – see below).