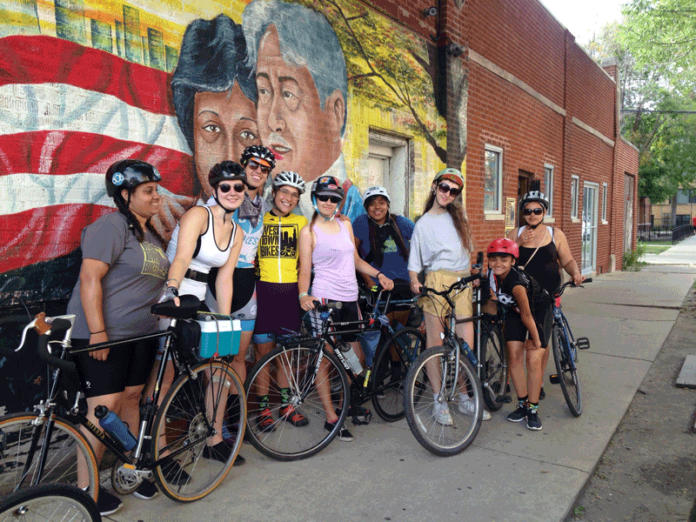 As we highlight Women’s History Month, we look at some of the young women from this community who have grown professionally and have become mentors to other girls through their work and experience with West Town Bikes. The Girls Bike Club (GBC) has been one of West Town Bikes (WTB) most successful youth programs, bringing opportunity and new skills to young women in the field of cycling. Since 2009, when WTB moved to its current location on Paseo Boricua (2459 W Division St), hundreds of youth have participated in programs that include bicycle mechanics and bike safety instruction. Here are some of the women who continue to grow and share their experience with the community. Coralee Montes has been the Business Manager at West Town Bikes since 2010.

During this time she raised her two daughters while completing her master’s degree at Roosevelt University. Because of her work at West Town Bikes she was able to offer her daughters opportunities for youth programs that they could participate in. Coralee, who is a lifelong Humboldt Park resident, loves giving back to her community by being a mentor to many youth in the neighborhood particularly those that participate in the youth programs at West Town Bikes.

Shacura Hawkins, who co-founded the GBC, was motivated by her mom Coralee, to participate in various youth programs. When Alex Wilson (Executive Director), requested a plan to get more girls interested in biking, Shacura and other girls started to brainstorm. They came up with a Bicycle gear Fashion show, and later the Heals On Wheels Campaign, to promote girls biking. Since 2011, the Girls Bike Club aims to strengthen leadership skills, share life advice and school advice. Through the guise of bike safety and maintenance, the program helps girls grow their self-esteem, self-confidence and to dream big. “We do mental health check-ins and exercises, making sure we are all self-aware and not bringing outside problems in,” says Shacora.

Ulana Coutts is a life-long resident of Ukrainian Village neighborhood and was told of the bike programs from her mother who happened to walk by the bike shop one day and saw the positive activity with the youth. Ulana had never ridden a bike before nor did she have any interest, nevertheless, she saw the positive atmosphere and cool people and decided to sign-up for the After School Matters. That experience allowed her the confidence to train first as a Junior Apprentice, where she excelled as a mechanic. She later was promoted to a Journeyman and eventually she became Assistant Manager at the Ciclo Urbano Bike Shop. “I never thought I would be into bicycle mechanics but I enjoyed it so much and I was accepted by both customers and the other mechanics at the Bike Shop”, says Ulana. She currently runs the Girls Bike Club program.

Andriana Vera was born and raised in Humboldt Park. She heard of WTBs programs during her sophomore year at Lane Tech. She enrolled in the After SchoolMatters, Youth Bicycle Ambassador programs, where she was able to earn a paycheck and go to school. WTB offered her opportunities to travel outside the state, including to New York, Boston and Oregon to attend the National Youth Bike Summit. Throughout the almost decade of her involvement, Andriana has had various jobs at WTB, including: sweeping and cleaning, administrative assistant, after school program instructor and now she works as the Program Manager. “I feel established and rooted in Humboldt Park”, says Andriana.