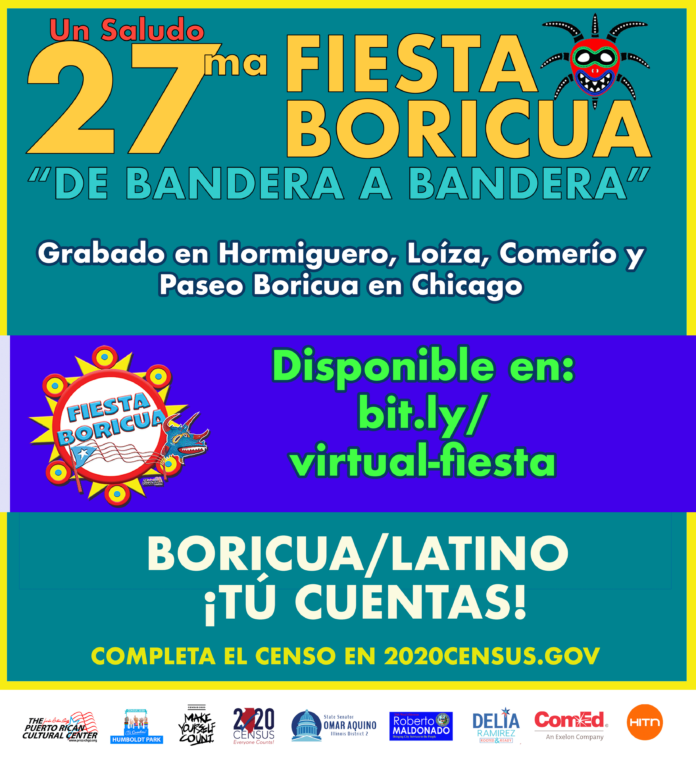 HITN will present a special program “De Bandera a Bandera” featuring one of the largest Latino festivals that take place in the Midwest. The program will include a posthumous recognition of Ramón Lopez, a principal contributor to the concept of the ‘Paseo Boricua’ and a visit to three Puerto Rican towns that stand out for their traditions and cultural richness.

Brooklyn, NY – HITN TV has announced a partnership with Chicago’s El Centro Cultural Puertorriqueño Juan Antonio Corretjer de Chicago (Juan Antonio Corretjer Puerto Rican Cultural Center, PRCC) for special coverage of the virtual 2020 Fiesta Boricua (Puerto Rican Festival). This is one of the largest Latino festivals, and the most important, that takes place in the Midwest. HITN’s coverage will include performances and an introduction to the Fiesta by Dr. Jesús Hernández Burgos, director of the Public Health Initiatives of the PRCC as well as a colorful segment, Lo Mejor de Nuestros Pueblos (The Best of Our Towns), highlighting the cultural heritage and traditions of three Puerto Rican towns. The special, De Bandera a Bandera (From Flag to Flag), will air on HITN on Sunday, September 6 at 6:30a.m. Pacific / 8:30 a.m. Central / 9:30 a.m. Eastern and will re-air at 9:30 a.m. Pacific /11:30 a.m. Central / 12:30 p.m. Eastern.

According to José E. López, Executive Director of the Puerto Rican Cultural Center, “Fiesta Boricua has become the quintessential representation of our Puerto Rican-ness in Chicago, particularly as it highlights the rich legacy of the city’s cultural roots through music, dance, food, theatre, arts, and bringing to the stage new and emerging artists from Puerto Rico.”

This year the Fiesta Boricua celebrates the 25th anniversary of the installation of the flags in the well-known ‘Paseo Boricua’, a six-block segment of Division Street between Western and California Avenue adorned with Puerto Rican flags, for which there will be a posthumous tribute to a principal collaborator of the founding of Paseo Boricua, Ramón López, López. The program will also feature renowned musicians. Some who have participated in previous years are Willie Colón, Ismael Miranda, and El Gran Combo.

During the broadcast, HITN will include a colorful segment entitled “Lo Mejor de Nuestros Pueblos” (“The Best of Our Towns”), which will highlight the culinary specialties and cultural traditions of the three towns in Puerto Rico. One of the towns is Hormigueros, on the west side of the island. It is also known as the “pilgrimage town,” because the Basílica of Nuestra Señora de Monserrate is located in the town’s historic district. Mayor Pedro Garcia Figueroa says, “This virtual festival makes us re-experience the emotions we had in 2011, on that journey from flag to flag, where we carried the image of our patron, Maria De Monserrate, in the same way we have always done it through the streets of my town. We open our arms to our Puerto Rican brothers and sisters on this occasion, and we embrace them, because we are all one people.”

HITN will also highlight the town of Loiza in eastern Puerto Rico, which is known for its cultural richness and Afro-Puerto Rican roots. Julia M. Nazario Fuentes, Loiza’s Mayor says, “Culture has a wonderful ‘soul’ that transcends borders, and now we know that it also overcomes the difficulties of the pandemic. In 2018 we had the honor of visiting Chicago for the Bandera a Bandera event, where we joined in fellowship with the people of our diaspora. This year we have had the joy of being part of the event, thanks to the wonders of technology. We hope you like Burén de Lina and Sheila’s turbans, as well as the music of Belelé and Junte Loiceño. When we least imagine it, we will embrace each other again. Whether here or there, we will always be Puerto Ricans.”

Finally, will also highlight the town of Comerío in the east central part of the island, which is often called “La Perla del Plata” (“Pearl of the River Plata”), and was known as a center of obacco. Comerios’ Mayor, José “Josean” Santiago adds, “Our town is distinguished by the passion to keep our roots alive, which identifies us as Puerto Ricans. We are very proud to have been the first town to be included in Lo Mejor de Nuestros Pueblos. Today, in celebrating 10 years, we remember, with much love and gratitude to all those who participated in this great event that marked our history and who have united us to the great Boricua community in Chicago. We send everyone a firm embrace and many blessings. If God allows it, we celebrate together the next Puerto Rican party of Bandera a Bandera together.” Former Congressman Luis V. Gutiérrez will close the event from Comerio.

During HITN’s special program the mayors of these cities will reinforce and raise awareness to the importance of being counted in this year’s census, promoting citizen participation, in an effort to maximize the participation by Puerto Rican families as a whole. It should be noted that according to recent data, less than 30% of Puerto Ricans on the island have filled out their U.S. Census forms.