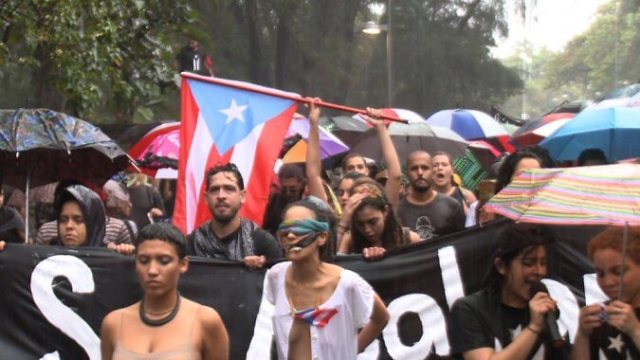 The United States’ political relationship began with Puerto Rico in 1898, when the United States Armed Forces invaded the island during the Spanish-American War. Our relationship was not one of mutual friendship but of colonial conquest. Under military rule, the United States turned control of agricultural land owned by thousands of small farmers over to just four US corporations, while prohibiting trade with other countries and locally sustainable means of production, creating an economic dependency on the US that exists today, through federally-backed austerity laws like PROMESA. For generations, the US used Puerto Ricans as medical experiments, sterilized us, and injected us with cancer cells. They made Spanish illegal in schools, and drafted our youth into the army as means of forced assimilation. Political leaders and private citizens who disagreed with the United States were fiercely persecuted, imprisoned, and often killed. To justify these actions they granted Puerto Ricans citizenship in 1917, and gave us limited self-governance in 1952. However, even today in 2020 all issues related to Puerto Rico go through the House and Senate Committees on Natural Resources. Moreover, the Supreme Court ruled “Puerto Rico is not the United States, nor party of the United States, but pertains to the United States”. For all intents and purposes, Puerto Ricans are still legally nothing more than US property.

Granting Puerto Rico statehood would at first glance be the logical solution to reconciling the abuses of the past, and the inconsistencies of this relationship. However, statehood poses many difficulties. Before becoming a state Puerto Rico would have to first become an incorporated territory where we would pay federal taxes without representation. The new federal taxes under statehood would cause the US companies in Puerto Rico to flee their Caribbean tax haven causing massive unemployment and increased poverty, while putting an increased tax-burden on Puerto Rico’s ever-shrinking middle class. The local government would have to cut essential services to decrease the tax-burden, meaning an increased dependence on federal programs. We must ask ourselves: what does real decolonization look like? Will statehood resolve the inequities of Puerto Rico’s relationship with the United States? Does statehood grant Puerto Rico the tools to rebuild and become sustainable?

It would appear that Puerto Rico could answer that question on November 3rd in a “Statehood Yes or No” Status referendum. However, that referendum has already been rejected by the Federal Government even before voting starts. The referendum itself, also doesn’t explain the merits of statehood as compared to other non-territorial, non-colonial status options, such as independence, which I support. A simple “Statehood Yes or No” referendum oversimplifies the complex issue of status and takes away power from the Puerto Rican people to decide our future. The referendum was created in such a way so the pro-statehood government currently in power can manipulate public opinion in the United States and Puerto Rico, while turning out their base in an electoral environment that is increasingly hostile towards their policies. Policies that go against the interests of the poor, workers, immigrants, and the LGBTQ+ community and favor the rich and big corporations, military-industrial complex, and the far right. While pro-statehood politicians try and manipulate their way into power, and impose statehood on the Puerto Rican people, they forget a very important fact that the United States must also consider. Puerto Rico is already a nation, and as a nation must decide its own future in a fully binding, democratic, and participatory process.

Despite over a century of U.S. political domination, colonialism, and assimilation tactics Puerto Rico is still a nation. Not only does Puerto Rico have linguistic and cultural differences with the United States, but historical ones. Puerto Rico was Puerto Rico long before the United States ever existed. Our legal system not only is based on the American system, but it inherits many laws and practices from the Spanish Parliament. We have our own political parties and institutions separate from the United States, and “Democrat” and “Republican” are often secondary labels to us. For example, only 7,022 Puerto Ricans voted in the 2020 Presidential Democratic Primary, but 494,477 voted in our local Gubernatorial Primaries under our local parties.

Aside from the external aspects of Puerto Rican nationhood such as language, tradition, and culture, or the practical aspects like institutional and political differences, as a community leader who repatriated to Puerto Rico, I have found that our nationhood goes far beyond that. Puerto Ricans have a fundamentally different way of understanding the world and of organizing ourselves. The collectives of sustenance farmers in the Eastern mountains of Aguas Buenas, the environmentalists preserving land and pushing for energy independence in the central mountains of Adjuntas, the community encampments fighting against pollution and toxic waste in the coastal towns of Salinas or Peñuelas, the artist collectives looking to revive Puerto Rican art and literature and make it accessible to the masses in urban Santurce; I have seen all of these communities, and our perceptions of the world, our collective visions and ways of building community, are often parallel to the United States. This is not to say that this “difference” is bad, or one is better than the other, it is to simply state that it is there, and in this diversity, of immeasurable quality and value, that must be preserved, and that reaffirms Puerto Rico’s nationhood.

In the early 2000s, Puerto Ricans came together to demand the end of the US military occupation of Vieques. In 2019, an estimated million Puerto Ricans took to the streets demanding the resignation of Gov. Ricardo Rosselló, and won. In these first two decades of the 21st Century, Puerto Rico has proven that we can take control of our political future and decide the fate of our nation. It is time the United States grants us the power to do that. Unfortunately, this November’s plebiscite does not allow such an opportunity.

Puerto Rico, legally recognized or not, is a nation, and must decide its own future. Could any American imagine Canada or the UK deciding the United States’ political future for them? Probably not. The United States needs to get serious about Puerto Rico. Will the U.S. make Puerto Rico a state despite the obvious challenges and problems it will create to reconcile their insidious past on the island? Or will it finally allow Puerto Rico to become independent, opening it up to the rest of the world and become sustainable, even if that

may seem contradictory to the U.S.’ best interests? Whatever they decide, it must be in agreement with the will of the Puerto Rican people, recognizing our humanity, collective voice, and identity as a nation. The United States needs to get behind a fully binding, democratic, and inclusive mechanism to resolve our status, and let the Puerto Rican people decide their own future as a nation and a people. Unfortunately, this November’s referendum is not it. Therefore, we call on Puerto Ricans to vote “no” on the referendum and be in favor of a real decolonization process. And we call on the United States to analyze its role in Puerto Rico’s future, and open the door for us to make that decision for ourselves.

Paul Lippert-Figueroa is a community activist in Puerto Rico, a candidate for San Juan City Council under the democratic-socialist Puerto Rican Independence Party (PIP) and a leader in the campaign “There Are Many Reasons to Vote No” calling on people to vote no in this November’s status referendum.