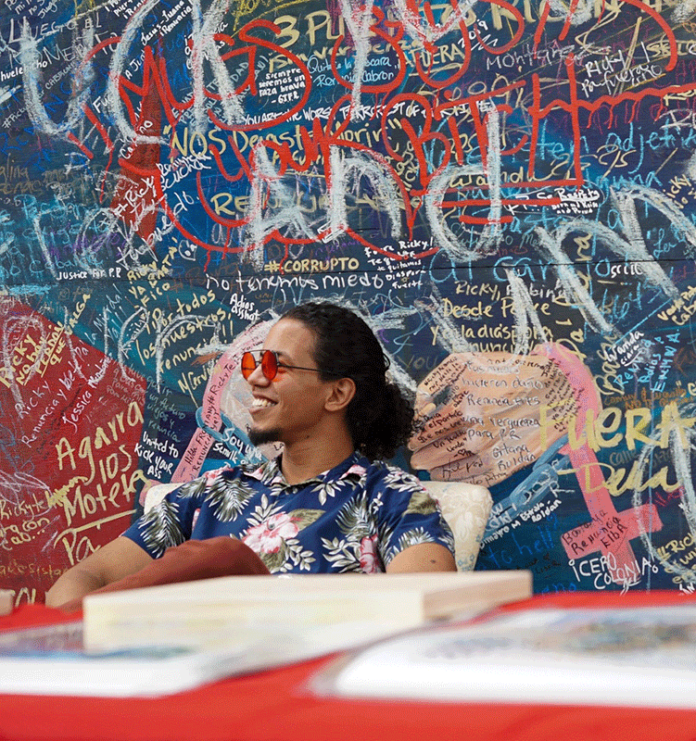 DJ Lugo Rosado livened the evening with his Tropical Beats, and set the stage for the “reggaetoneros”. Rosado said that the singers (both in their 20s) reminded him of the struggle he endured when starting as a Latino DJ in Chicago. He said he is always happy to pave the way for new talent, especially from Humboldt Park.

Artist Cristián Roldán introduced his mural “Diasporic Rican” situated adjacent to Esmeralda’s. The imagery recounts key migrations of Puerto Ricans to the US. It is a dazzling display of colors and forms depicting: Puerto Rican migration to Hawaii in 1900, after two hurricanes devastated the island; the migration of workers to steel mills in Chicago; the brain drain of the 80s when US companies hired Puerto Rican professionals out of college to work in the U S, and two natural disasters that triggered another wave of migrations – Hurricane Maria (2017), and the earthquakes (2019 – 2020). The mural ends with a Taino moon and a quote from Juan Antonio Corretjer’s poem “Boricua en La Luna”, which concludes, “Yo sería borincano hasta si naciera en la luna” (I would be Boricua even if I were born on the moon).

PRCC Business Initiatives Director, Carlos Bosques, welcomed Esmeralda’s owner, Dino Vulpitta, to the Paseo. Vulpitta described his upbringing in Humboldt Park and his continued love of the community and the people. He is now partnering with the PRCC to sponsor an entrepreneurial program for youth, likely to begin in the spring of 2021