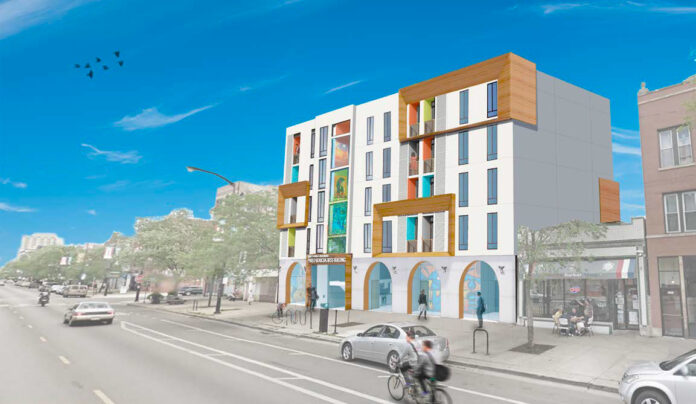 The long anticipated Paseo Boricua Arts Building project has taken a major step forward toward groundbreaking. In a press release issued November 16, Mayor Lori Lightfoot’s Office voiced its support for a Bond Ordinance to fund the Paseo Boricua Arts Building. The Bond Ordinance would authorize the City to amend an existing ordinance and issue an additional $6 Million in bonds for a total not to exceed $12 Million in tax-exempt housing revenue bonds to Paseo Boricua Arts, LLC. The Finance Committee approved the ordinance the following day.  A follow-up hearing of the Finance Committee will be held on December 14th. Once approved, this ordinance will go to the full City Council for final approval on December 16th.

The Paseo Boricua Arts Building has been a major project of The Puerto Rican Cultural Center since it purchased the properties of the former Ashland Sausage Company in 2013. The project suffered delays due to rising costs of building construction, which quickly surpassed the original construction budget. Now with the new financial commitment from the City of Chicago, The Puerto Rican Cultural Center and its partner Brinshore, LLC, look to initiate the groundbreaking by early 2021.

The five-story building is designed by UrbanWorks Architects and will feature a spacious common area and office for building operations on the first floor, as well as two commercial retail spaces including a black box performance theater that will be leased by The UrbanTheater Company. The 2nd through 5th floors will include 24 affordable, Live/ Work units for artists and their families and will be a mix of studios, one-bedroom, and two-bedroom units for tenants with incomes at 30% to 60% of the area median income.

The Project was renamed The Nancy Franco Maldonado Paseo Boricua Arts Building, in honor of 26th Ward Alderman Roberto Maldonado’s late wife Nancy, who was an ardent supporter of the project before her untimely death due to cancer in 2016.