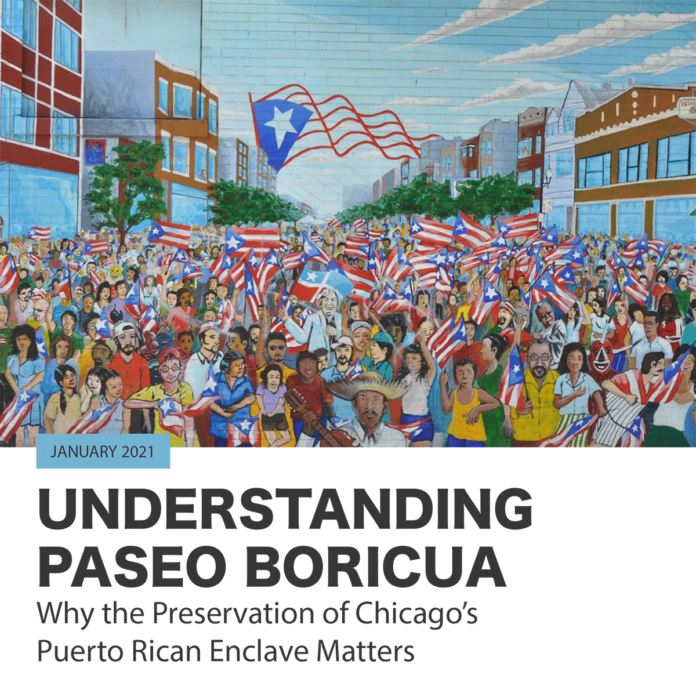 Paseo Boricua, which loosely translates to “Puerto Rican Promenade,” is the center of Puerto Rican culture, business, and politics in Chicago. Since 2000, the rate of gentrification on Chicago’s northwest side, where Paseo Boricua is located, has increased significantly. Community leaders and residents have worked fervently for decades to maintain Paseo Boricua and the surrounding area as a Puerto Rican space by protecting and expanding affordable housing, investing in arts and culture, and supporting Puerto Rican-owned businesses. In the context of a place at risk of losing its population and character, this thesis asks: Why does the preservation of Paseo Boricua as a Puerto Rican cultural enclave matter? Through interviews with twenty-one community leaders and residents, historical research, and a review of public media, I present three themes that illuminate the significance of Paseo Boricua. First, the district represents Puerto Rican self-determination—a reality that is not possible on the island due to its continued colonial status. Second, the place honors and teaches Puerto Rican identity, history, and culture. As Puerto Ricans have faced centuries of colonization, exploitation, and oppression, Paseo Boricua provides space for Puerto Rican people to celebrate their resiliency and joy. Third, the distinctive food, music, art, culture, and leadership of Paseo Boricua contribute uniquely to the vibrancy and diversity of Chicago. I conclude by arguing that the city of Chicago must preserve Paseo Boricua—the only officially designated Puerto Rican cultural district in the United States—through concerted policy and planning efforts in partnership with local community leaders. This thesis seeks to contribute to the ongoing conversation and strategy regarding how to preserve Puerto Rican culture on Paseo Boricua and why it matters.