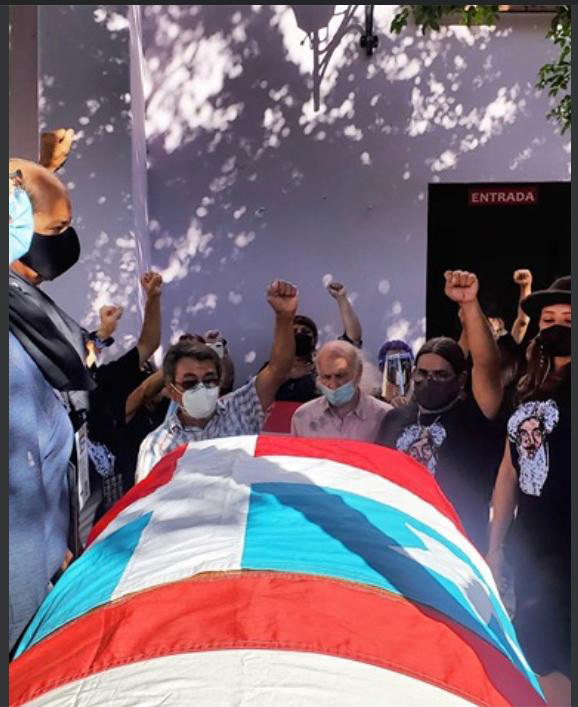 Elizam, as his comrade Alberto Rodríguez told Claridad – you only needed to say his first name, because we all knew there was only one Elizam and there will never be another – left this earth on January 15, 2021. He was the first of his generation of Puerto Rican political prisoners to die. His comrades, all deeply affected by his death, marveled at his amazing strength over almost five years living with cancer. And live, he did, creating art up to his last breath. Aware that his body was failing and that his time on earth was waning, we convened what we all sort of knew was a despedida, in November. A get-together, safely distanced, in the marquesina. Even though he couldn’t eat or drink by then, he insisted that Yolanda, his compañera, and I put on a real party, with food and drink and music, for a family who had formed over their love for their country, having served decades of their lives in prison, and who continued to share their lives after they came home. Elizam was clear about his wishes: he wanted a wake at La Casa de los Contrafuertes, a collaborative interdependent art space in Old San Juan, run by dear friends Ana Rosa Rivera and Charles Ju-hasz Alvarado, where he had often collaborated and exhibited. With a team of experienced compañeras from the independence and feminist movements – “las Bravas,” I called them – Rita Zengotita, Alida Millán and Marilú Carrasquillo, Yolanda and I worked to plan the send-off he wanted, which included obtaining an exception to the COVID rules prohibiting wakes outside of funeral homes, and working with dozens of independentistas who served to ensure everyone was safely distanced waiting in line and making their way through the space. Fulfilling his wish-es about speakers and music, we

put together a spectacle. His friends Tony Mapeyé, El Topo, Andy Montañez, Chabela, Violines and others played his favorite music, and family, fellow artists, poets, friends, and movement leaders spoke. His comrades served as honor guard. Claridad graphic designer Iván Figueroa prepared a beautiful program to distribute, and Claridad photojournalist Alina Luciano prepared a slide show. The professional livestream, thanks to the Museo de Arte de Puerto Rico, meant that his son Elizer and his family in New York, and so many others, could “be there.” It meant so much to see the photos from Paseo Boricua, of people gathered to watch the livestream. Hundreds of people of all generations came to bid him farewell: former students; fellow art professors; artists and poets, actors, musicians and filmmakers from his days of hanging out in Old San Juan; independence activists; family and friends and neighbors. Some cried, some saluted, some even kneeled. At the end of the wake, as we sang one of his favorites, “Mira la que linda viene… la revolución boricua, que no da ni un paso atrás,” Alicia Rodrí-guez, standing at my side in front of the ferretro, looked at me smiling and said, “This is what Eli-zam sang when we were arrested!” We then carried the coffin, draped – fulfilling his wishes – with the Puerto Rican flag and the flag of Lares, out to the waiting hearse, and sang La Borin-queña, as people shouted, “¡Qué viva Puerto Rico libre!” and “¡Qué viva Elizam!” Elizam was clear about another wish: to convert his home and studio into a Casa Museo, a place for research, workshops, poetry readings – a sort of cultural center. We hope to make this wish come true. ¡Qué viva Elizam!