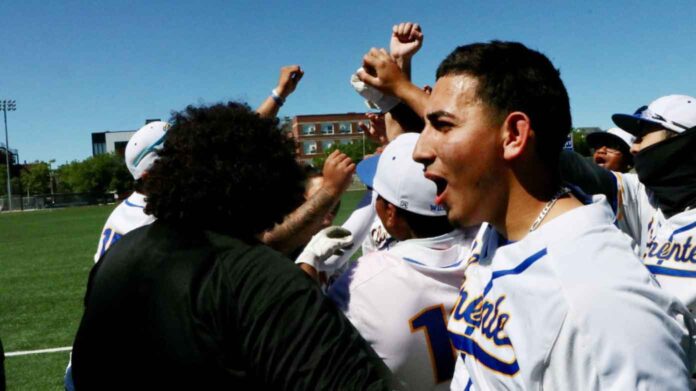 The Wildcats’ dramatic win in their last game was an emotional end to a season after spending a year sidelined by the pandemic.

HUMBOLDT PARK — The Roberto Clemente Community Academy Wildcats were down to their final three outs on Saturday, trailing 4-1 in the last game of the high school season.

Then senior captain James Solís — his helmet covered in Naruto stickers — stepped to the plate, kicking off a four-run rally to beat Kenwood Academy. With eight graduating seniors, it was a dramatic win on Clemente’s Senior Day. For the players and their families, it was an emotional end to the team’s first season since the coronavirus pandemic.

“No matter what, as a team, we never gave up hope,” senior Isiah “Big Baby” Santos said. “It really shows we put our hearts into this.”

Solís and head coach John Pérez seemed to recognize the moment during that pivotal at bat, too. As the senior dug his cleats into the sand, he glanced toward the third baseline and locked eyes with the coach.

“To see his eyes glossing up for a quick second, I started almost getting choked up,” Pérez said. “It was definitely a proud moment to see that young man make it through his senior year.”

Senior Day was a celebration of the Clemente community. Humboldt Park families cheered with posters and bighead cutouts of their seniors. Former players, many with memories of the program’s decorated history in the ’80s and ’90s, came to check out the latest generation.

For many Humboldt Park residents, attending Clemente and supporting the baseball team runs in the family. Santos’ mother, Leticia Pratts, wore her Clemente Class of 1985 ring for Senior Day and gripped a handful of baseball-themed balloons. Pratts’ six brothers are all Clemente graduates, too.

Sonia Matos, mom of senior Geremyah “Spanky” Rivera, graduated from Clemente in 1993. She rocked a custom “Senior Mom” T-shirt, which has her son’s picture on the front and his name and number on the back. She coached her two sons in baseball when they were kids and now plays softball in a Humboldt Park league.

“I went from being a snack mom to scorekeeper to car-pooling mom to taking-pictures mom, until I went to coaching,” Matos said.

In keeping with the theme of the day, it was Clemente’s seniors who set up the team for their big win.

After Solis reached first base in the seventh inning, Rivera walked to keep the momentum going. After another walk, senior Raul Figueroa hit a bases-clearing double to tie the game 4-4. Santos bunted to continue the rally.

With bases loaded, up to bat came sophomore David “Bubba Shrimp” Silva, marking only his third game of high school baseball. The next ball bounced off his helmet — for a walk-off hit by pitch and a 5-4 win. The seniors piled on top of their young teammate in celebration.

After a year away from competitive baseball , the Wildcats finished their season with a record of 10-3 (8-0 in conference) and capped it off with a comeback win at home.

“I like all the guys. And I’m here to support them,” Silva said. “I just learn from them, so when my time comes, and I become a senior, I can do what they did.”