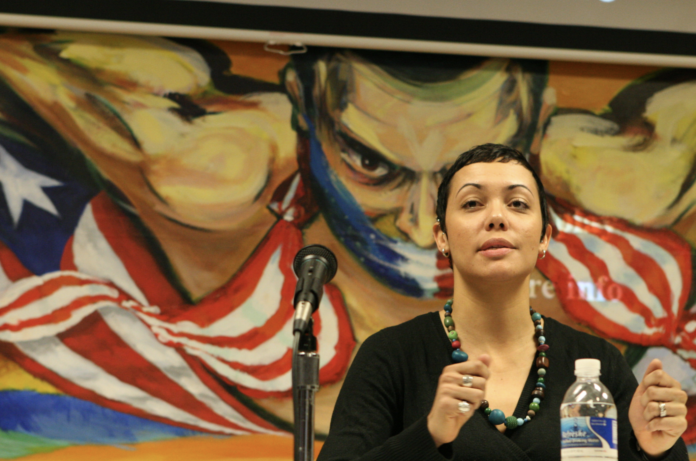 I first met Michelle Morales in late 1997, or early 1998 as part of the Dr. José Solis Jordan Defense Committee, a grouping of activists and students that came together at DePaul University, where Solis Jordan taught. I remember meeting Marisol and Miguel Morales (no relation) at that time also.

The three students quickly became a core part of Solis’s defense work. At that time, the organization in the US leading the campaign to free the Puerto Rican political prisoners was the National Committee to Free Puerto Rican Political Prisoners and Prisoners of War which collaborated with many organizations in Puerto Rico but especially Ofensiva ‘92 led by the brilliant author, attorney, and sociologist Dr. Luis Nieves Falcón. Shortly after the release of the prisoners in September 1999, the National Boricua Human Rights Network absorbed the Solis Defense Committee.

Michelle quickly became a core part of the National Boricua Human Rights Network, playing a significant role in the Network’s education and mobilization around national issues like the expulsion of the US Navy from Vieques, Puerto Rico, and local issues like gentrification and public health access in the Humboldt Park neighborhood of Chicago, IL, the historic heart of the Puerto Rican community.

As the campaign to free the remaining prisoners expanded and evolved, Michelle took on more responsibility, accepting the role of treasurer and then stepping up to lead the Chicago chapter. Her work and that of many organizations and individuals resulted in the freedom of Carlos Alberto Torres after 30 years of unjust imprisonment in July of 2010.

Shortly after he was released, she penned the following article for La Voz del Paseo Boricua. We re-publish this article on the eve of her double-mastectomy, sending her love, revolutionary hope, and strength.

On behalf of your compañeros/as, young and old, from the Dr. Pedro Albizu Campos Puerto Rican High School, Puerto Rican Cultural Center, and National Boricua Human Rights Network, we know that YOU CAN ACHIEVE ANYTHING.

We Can Achieve Anything

On July 26, 2010, our people, the Puerto Rican people, will celebrate yet another victory for our nation – the release of one of our compatriots, Carlos Alberto Torres. Carlos Alberto has been living behind bars for 30 years – 5 years less than my entire life. Because of his belief in the freedom of Puerto Rico, he has been devoid of a relationship with his daughter, with his sister, his niece, his grandchildren, his stepmother – something which I cannot imagine or perceive. The absolute absence of being able to kiss my son, or hug my mother or talk to my sister whenever I want to is completely outside my reality. But this is the reality that Carlos Alberto, and Oscar Lopez Rivera & Avelino Gonzalez Claudio, live with every day. I want to stress the word “live” because that is what they do, even behind bars. They live through their paintings, their ceramics, their wonderful letters to the outside, their phone calls.

The freedom of Carlos Alberto means more than I can express in this article. I have been privileged to be part of the amazing campaign to release Puerto Rican political prisoners since 1998. In 1999, when I was only 24 years old I witnessed the release of the 11 compañeros. Since then, I have actually become friends and peers with those men & women that I had read about and looked up to. In 2003, I witnessed the victory of the people of Vieques ousting the U.S. Navy from their island. To be part of two amazing events early in my activism was truly astounding. It showed me how hard work & years of struggle will pay off and how truly incredible we, Puerto Ricans, are. I learned that we can achieve anything. We are the only people who have won the release of so many political prisoners – and now we can add Carlos Alberto to this list. And it has taught me that the impossible is never out of reach and that a new world is certainly possible. In the last 7 years, I have become friends with Carlos Alberto.

It started with simple correspondence, telling him about my work with the Puerto Rican Cultural Center in Chicago & the National Boricua Human Rights Network. But each time I would write him, he would send back such beautiful letters with words of encouragement and gratitude. I was taken aback by the beauty of those letters, of the gratitude of a man I had never met and had never met me. In the progressing letters, I sought advice from him and it was always received. And many times, when I was going through a rough time in life or in the work, I would receive a letter from Carlos Alberto with just the right encouragement and advice that I needed to continue. Many times I wondered how he, Oscar & Avelino timed such letters. How did they know what to say and when to say it and that it would correspond to what was happening in our lives? That, to me, is what is so amazing about them. Women and men who have spent so long behind bars, been deprived of so much, yet greet you with absolute love and warmth – two things that they have not allowed prison to take away from them. They could wallow in despair and bitterness, but they choose not to – they choose to live in love and to express that love. Love is what this release means to me. The love we, as the Puerto Rican people, have for Carlos Alberto, Oscar, and Avelino – the love that has helped us persist after 30 years and to never give up on their release. And their love for us, their families, for themselves, and ultimately, their great love for our beautiful Isla – Puerto Rico.

And yet, this release is also bittersweet. While I am ecstatic to finally meet Carlos Alberto, I am also deeply saddened that Oscar & Avelino remain in prison. Carlos Alberto’s release cannot make us complacent. It must motivate us and give us the extra fire to push on and continue to fight for our remaining two compañeros – Oscar López Rivera & Avelino González Claudio.

Use the following links to see Michelle Morales’ vital work throughout the years:

“We can achieve anything” slideshow: https://flic.kr/s/aHsmWWCUnh

“Today I received the most incredible news – that Oscar Lopez Rivera will be freed. I will admit that towards the end I began to lose hope and began to emotionally prepare myself in case he didn’t get released. There are those around me though that never lost hope – Luis Alejandro Molina and Oscar’s brother, José López.

Out of my 41 years on Earth, 20 have been spent campaigning for Oscar and other political prisoners. Believe me that I know that there are many others who have dedicated many more years to this cause. Fighting for Oscar has always put things in perspective for me & has taught me a resolve that I cannot explain. I think of Oscar each year that passed, each birthday, each holiday. Oscar often helped me with the advice he gave me in many of the letters we exchanged. To think – he helped me. But that’s how Oscar is.

More importantly, the campaign has taught me that nothing is impossible and that people and communities can move mountains. In those 20 years, I have been incredibly blessed to witness the release of the first batch of political prisoners in 1999, the US Navy leaving Vieques in 2002, the release of Carlos Alberto Torres in 2010, and now this. The campaign has taught me an innumerable amount of skills and has given me some of my closest friends – including ex-prisoners Ricardo Jimenez, Luis Rosa Perez & Edwin Cortes. Thank you to everyone who supported this. I’m just overwhelmed.”