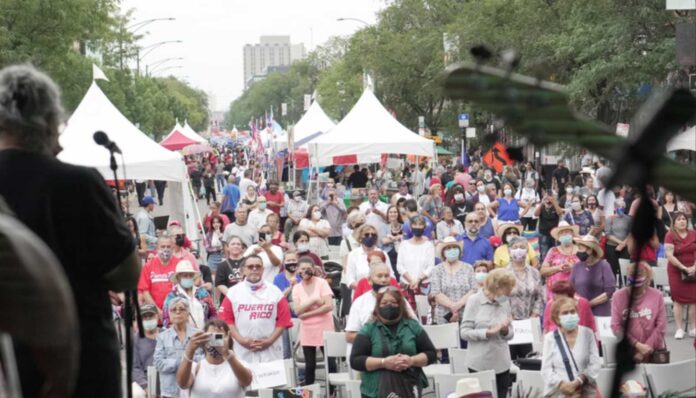 A Stunning Success with the best sounds and rhythms of Ciales

The 28th Fiesta Boricua “de Bandera a Bandera” was a stunning success where thousands upon thousands of people, particularly families, immersed themselves in the Puerto Rican cultural experience.  Every participant was able to grasp the beauty, the depth, and the wonderment of our culture as expressed by the Cialeños.  All our invited performers, vendors, event sponsors, and invited guests from Puerto Rico, particularly from Ciales, which this year represented “Lo Mejor de Nuestros Pueblos” were mesmerized by what transpired during this Labor Day weekend on Paseo Boricua.

While our performers, vendors, sponsors, and invited guests contributed so much to the success of our 28th Fiesta Boricua, it would not have been possible without the amazing labor of love of our volunteers who weaved this incredible cultural masterpiece.  To them we extend our deepest gratitude, because their commitment made this unforgettable event another outstanding chapter in the 28 years of Fiesta Boricua.

1. the C.A.A.C./S.C.A.N. back to school carnival where hundreds of youths were provided with full all-day passes for rides once fully vaccinated.

2. The Noche Jíbara/Guayabera Gala at the National Museum of Puerto Rican Arts and Culture, which formally ushered in the 28th Fiesta Boricua with an amazing graceful and engaging performance by the dancers, musicians, and singers from Ciales.

Sunday, Sept. 3rd from Bandera to Bandera 1000s strolled along Paseo Boricua beginning at noon; they savored the best frituras, the smooth piña coladas, as well as attracted by the aroma of Cafe Cibales and captivated by the very intricate demonstrations by the Villalobos family of Puerto Rican furniture making, and the incredible moves by Nora as she put together her turbans from Guayama.  By 5pm the traditional protocol ceremony was held honoring the town of Ciales as the representative of Lo Mejor de Nuestros Pueblos. While the Carnival continued throughout the evening, thousands gathered in front of the mainstage creating a sea of Puerto Rican flags to welcome the final act of the 28th Fiesta Boricua.  The engrossing historical syncretism of Puerto Rican salsa was presented by Flaco Navaja who took the audience through a journey of the best exponents of Puerto Rican salsa from his original home – his native Bronx, New York.

Back to School Carnival logistics crew led by Jessie Fuentes and Marvin Garcia: