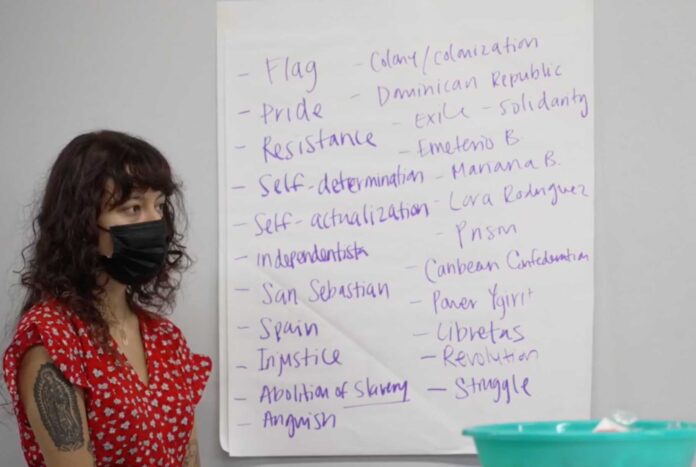 This year in honor of the 153rd anniversary of El Grito de Lares, The Puerto Rican Cultural  Center held a “charla informativa” and short film screening of “Road of no Return: The Banishment of María de Las Mercedes Barbudo”. 153 years later, El Grito de Lares continues to have profound relevance for Puerto Ricans because our struggle against the exploitation of colonialism is ongoing; we fight for many of the same human rights the revolutionaries of El Grito de Lares fought for, such as: self-determination, freedom from exploitation of our labor, Black liberation, independence, and much more. In this charla on the Grito de Lares, we discussed the significance the Grito as a revolutionary movement of resistance and solidarity across Puerto Rico. The charla began with an activity in which all participants were asked to say one word/concept that came to mind when they thought of El Grito de Lares. This participatory exercise, led by PRCC Executive Director José E. López, became a powerful learning moment as we discussed the cruel realities of colonialism, and the great resourcefulness of the Puerto Rican people as they resist colonialism.  Director Lopéz detailed how Black abolitionist and liberation movements, maroon societies, and slave uprisings were foundational to El Grito de Lares. He challenged the attendees to survey our rich history, to make connections, and consider the lessons we can draw from all of these. The charla was thought-provoking throughout. Toward the end, we were moved to consider this moment, and to stand in solidarity with all people who continually struggle under the weight that centuries of colonialism have unloaded on them. We stand in solidarity with our Caribbean siblings in struggle, and particularly with Hatian asylum seekers at the US-Mexico border who are criminally whipped and tortured by U.S. border agents.