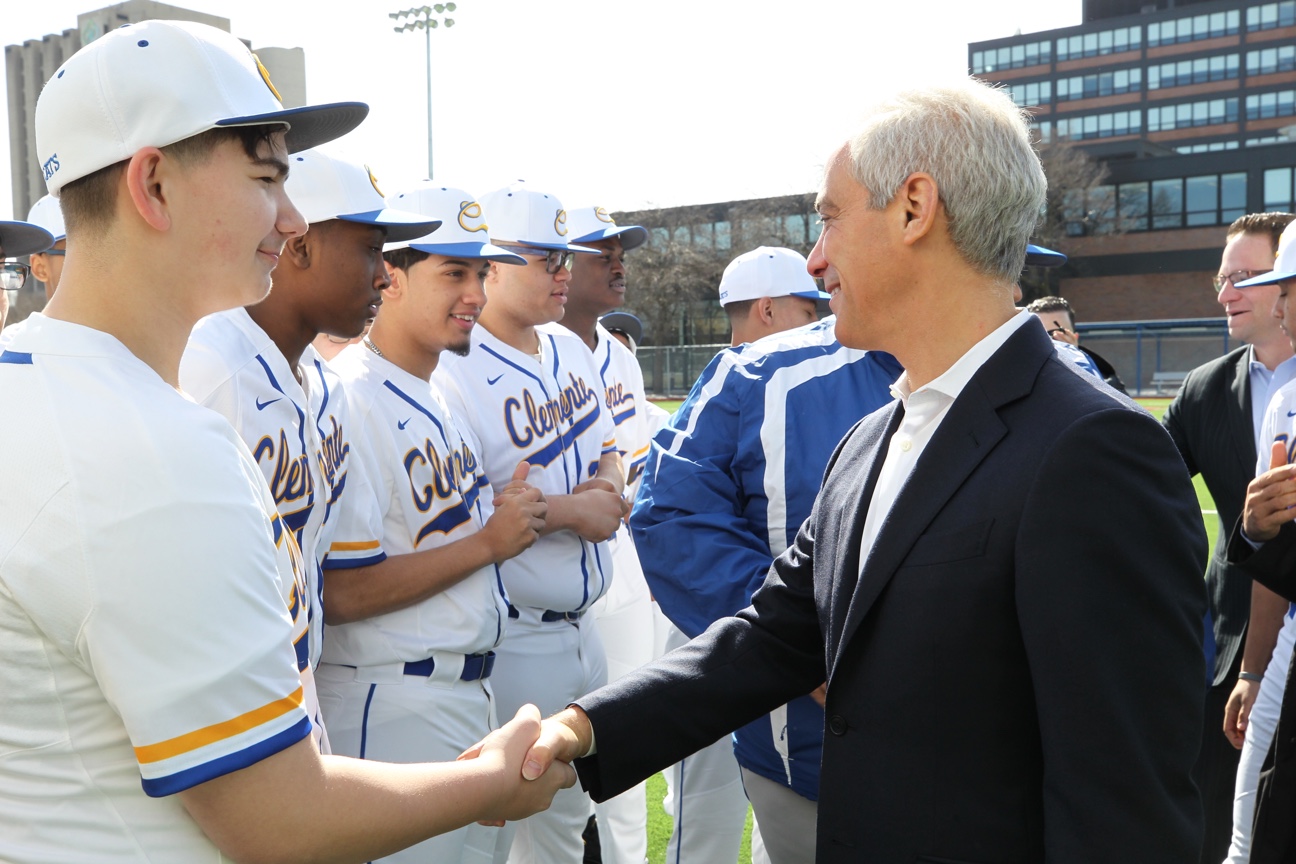 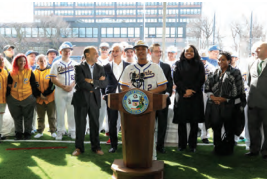 lemente not only support the students of Chicago; they are investment in our residents and the future of our City,” said Mayor Emanuel. “These brand new athletic fields will help both students and west side residents to stay engaged and on track to a brighter future.” The fields at Clemente will be used primarily for softball and baseball; Clemente field now has spectator seating, improved lighting, underground drainage infrastructure and storm water management and other amenities. “I am thrilled that we can provide our residents and the hard-working students at Clemente with the high-quality athletic fields they deserve,” said Alderman Proco Joe Moreno, 1st Ward. “Ongoing community investments like these fields would not be possible without the commitment and determination from our local leaders and students.” Roberto Clemente Community Academy is now home to a 120,000 square foot competition-size synthetic turf field for baseball and softball, and a sodded turf for practice and recreational use. Additional updates include team dugout areas, a press box and dual scoreboard, and removable outfield fencing with foul poles, a ball stopper system and backstop; the $3.9 million investment was funded by the Capital Improvement Tax. “This athletic facility will help students at Clemente lead healthy, active lives while providing experiences that will instill the invaluable lesson of teamwork,” said Chicago Public Schools Chief Executive Officer Dr. Janice Jackson. Clemente has continued to make academic gains since 2011 and graduated its first wall-to-wall IB class in 2016. In 2012, Clemente was the third school to announce wall-to-wall IB programming, which was first at Back of the Yards and Nicholas Senn High School. Chicago is home to the largest network of IB schools in the nation, with 52 schools (22 high schools and 30 elementary schools) currently serving more than 26,000 students enrolled in IB coursework citywide. “Coupled with our strong academic programming, this high-quality athletic facility provides Clemente students with a well-rounded education in the Humboldt Park community,” said Roberto Clemente High School Principal Fernando Mojíca. “With the support of previous administrators and future-focused parents, Clemente is now a world-class neighborhood school with students graduating and going to college in record numbers.” Under Mayor Emanuel’s leadership, there have been significant ongoing investments to underdeveloped parts of the neighborhood. Among these investments is a $3.5 million facility for La Casa Norte, one of Chicago’s most innovative non-profits that can now serve more residents. Signioficant investments were made to develop affordable housing, and include Borinquen Bella L.P. North & Pulaski Senior Housing, Children’s Place Association LLC, Nelson Mandela Apartments, among others. These developments are in addition to the more than $8 million in Chicago Housing Authority investments to modernize, retrofit and update buildings across the neighborhood. “Chicago’s Puerto Rican community has an incredible friend in Mayor Emanuel, and I appreciate his support as we continue to invest in Humboldt Park and welcome families with open arms,” said Luis V. Gutierrez, US Representative, 4th District. “When tragedy struck Puerto Rico, we got to work right away in Chicago, and I am immensely proud of our continued efforts to help them rebuild and recover.” Humboldt Park, a community anchor, has seen more than $8 million in investments to support upgrades since 2011, including the construction of artificial turf athletic fields, improvements to the swimming pool and rehabbed field house.

José E. López, PRCC Executive Director states: “ The renovated Clemente Field, on one side, and the National Museum of Puerto Rican Arts & Culture on the other side, now bookend ‘the magical urbanism’ taking place on Paseo Boricua.”

In his remarks during the ribbon-cutting ceremony for the renovated baseball and softball field of Roberto Clemente Community Academy, the Puerto Rican Cultural Center’s Executive Director, Jose E. López, extolled the amazing achievements and developments of Paseo Boricua–the commercial and cultural Puerto Rican Strip along Division Street–since its creation 25 years ago. In this pedacito de patria, Chicago’s Puerto Rican Community has built what López described as a true reflection of ‘magical urbanism’ particularly informed by all the new developments this area encases, and which have been wholeheartedly supported by Mayor Rahm Emanuel. He challenged those who have advanced the narrative “of the tale of two cities” to visit Paseo Boricua, and they may discover a third city emerging on this mile-long corridor. In this strip they will uncover how a deeply committed community has engaged the imagination of this Mayor, and how he has responded by wholeheartedly supporting these efforts which include the following: • the Nancy Franco Maldonado Arts Building – an $11,000,000, 24-unit building that will provide living and work spaces for community artists • an 84 unit “teachers” village apartment complex to be created in the shuttered Von Humboldt School building providing affordable housing for teachers in the community, and a critical space for action and reflection • an early childhood educational center, inaugurated on March 3, 2018, which will provide a quality educational experience for 150 children, 0 – 5 years, with wrap-around social emotional services in a dual language setting. The Consuelo Lee Corretjer/Nancy Franco Maldonado Parent Development Center will house this innovative program in an aesthetically pleasing, child focused space. In closing, López stated this is just the beginning. There is a lot more to come for this corridor. He then introduced CPS/CEO Dr. Janice Jackson whom he called “a young”, innovative educator who will shape a new urban education. He acknowledged her support of the Community as a Campus initiative which is now being implemented in Humboldt Park, and which has received a $250,000 grant from the Chicago Community Trust.