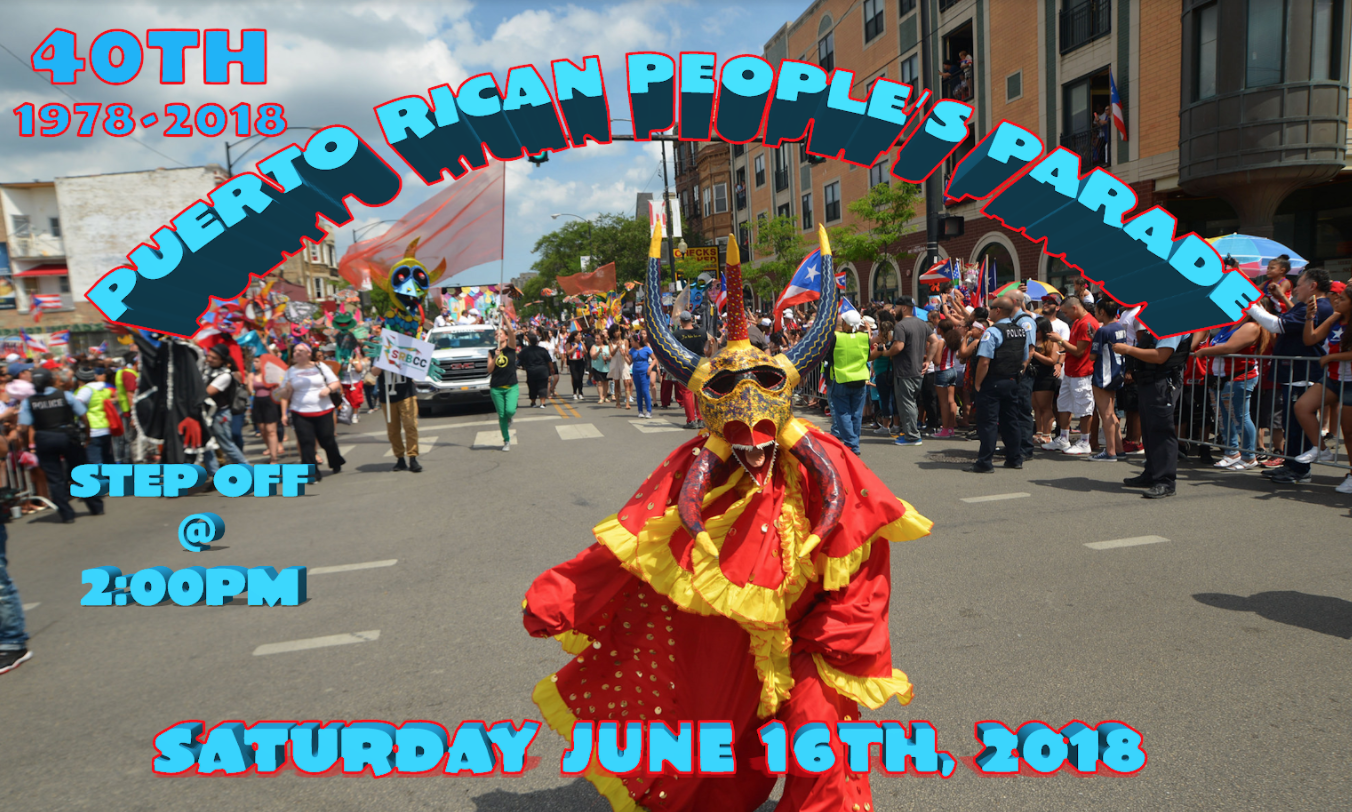 The Puerto Rican Cultural Center will be celebrating a historical achievement – the
40th Annual Puerto Rican Peoples Parade (1978 – 2018) on Paseo Boricua, starting at
2:00pm on Division &amp; Western, on Saturday June 14th , 2018.
This year the parade will honor its founders and will highlight the 3R’s PR campaign
“Rescue, Relief, Rebuild Puerto Rico” of the Puerto Rican Agenda. These founders
are being honored as the pioneers, whose vision and diligence, started a space in
this community forty years ago to promote our culture and celebrate our resilience
in the face of the discrimination and marginalization which had caused the second
major Puerto Rican rebellion, taken place in June of 1977 – responding to the cold
blooded murder of two young Puerto Ricans by Chicago’s police. From its inception,
the founders assured that the Parade would showcase Puerto Rican art, music and
culture without the adulterated depiction, which many traditional ethnic parades
undergo as a result of commercialization. Forty years later we will celebrate, in a
carnival-like environment, and frame this Puerto Rican cultural experience within
the language of social criticism and the discourse of possibilities.
This year’s Parade will additionally highlight the work the Puerto Rican Agenda has
undertaken in response to the humanitarian and the exacerbated economic crisis
that Puerto Rico faced as a result of Hurricane María. The Puerto Rican Agenda of
Chicago was the first organization of the Puerto Rican Diaspora to land an airplane
with cargo on the island, and to have that same plane return with 300 people
stranded at the Luis Muñoz Marín Airport. Since the passing of Hurricane María, the
Puerto Rican Agenda has raised over $400,000 and directed funds for aid and micro-
grants totaling $250,000 to 30 municipalities in Puerto Rico.
During the weekend of March 23 rd , 24 th and 25 th members of the Puerto Rican
Agenda traveled to Puerto Rico with a Chicago delegation, including Congressman
Luis V. Gutierrez and Mayor Rahm Emanuel; and met with the mayors of San Juan,
Comerío and Loíza. 5,200 pounds of supplies, collected by the Puerto Rican Agenda
and the Puerto Rico Relief fund of South Central Wisconsin, was distributed. The
Agenda presented $4,000 each to schools in Comerío and Loíza, as a youth to youth
fund raising initiative.
There are many ways one can be part of the efforts to make the 40 th Puerto Rican
Parade a community success, including the following:
 Join the Parade festivities on Saturday, June 14 th
 Buy an ad in La Voz de Paseo Boricua Parade Special Edition Insert
 Donate to the Puerto Rican Relief Fund at www.puertoricanchicago.org
 Donate to the Parade vía https://prcc-chgo.org
See you there!
For more information, please contact Leony Calderón lenonyc@prcc-chgo.org