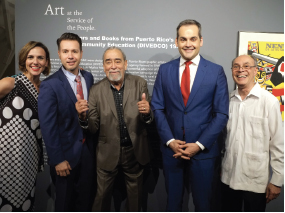 It was an amazing evening! All of the senses were awakened by the sound of drums, and music, the sights of Puerto Rican costumes and exhibits, the smell of lechon with rice and beans, even the temperature brought recuerdos de la isla (memories of the island). It was like a tropical evening in Puerto Rico had landed in Chicago. The National Museum of Puerto Rican Arts and Culture celebrated its 5th Annual RAICES Gala on September 20th, exactly one year after Hurricane María devastated the island of Puerto Rico.

The evening’s program kicked off with ChiArts students delighting the guests with a live performance of “I like it like that”, followed by the music and dance of AfriCaribe, a local community bomba group. WGN reporter, Ana Belaval, was given a surprised recognition for being the event’s emcee for the 5th year in a row.

This year, there were three Ceiba Award recipients: legendary singer and songwriter Andy Montañez, CBS news correspondent David Begnaud, and actor Jon Seda. The people came together to recognize the incredible effort and contributions made by them in order to keep the world informed of the terrible nightmare our people went through, and to keep us updated on everything that was going on in Puerto Rico during and after the storm had hit the island.

National CBS Correspondent, David Begnaud, whom accepted the Ceiba award in a flow of emotions, reminded people that this was a somber day and that “what happened in the Island of Puerto Rico cannot be overstated”. Haley Seda, the daughter of awardee Jon Seda, surprised her father by singing a song before he humbly accepted his award. Andy Montañez accepted his award by singing.

Through it all, the celebration, the hurricanes, the multiple tragedies, and the possibilities of rebuilding, HITN was there to say “¡Presente!”. Working with community and governmental partners in Vieques, in Comerio, New York, and Chicago among other places- bringing ideas and resources to the table. HITN’s CEO and President, Michael D. Nieves, Guillermo Sierra, Head of Television and Digital Services, Angel Audiffred, Marketing Manager, and L. Alejandro Molina attended the evening’s celebration. In addition, Nieves was introduced as the National Museum’s newest Board member

Before ending the program, 13 year-old Mia Laureano wowed the crown by singing a beautiful rendition of “Hallelujah”, kicking off the museum’s scholarship fund. Mia’s talent was discovered by the museum when she attended a performance masterclass during NMPRAC’s Barrio Art Fest.

The RAICES Gala ended with a one-hour concert by the “Godfather de la Salsa” Andy Montañez, as everyone danced to his salsa music. As people were leaving, a few said it was like being in Puerto Rico, you could even hear the sounds of the “coqui” in the distance.