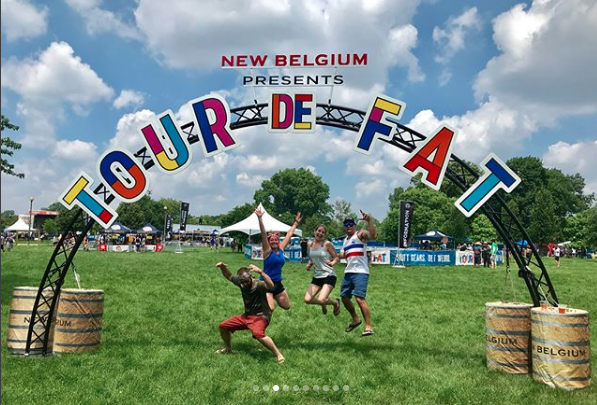 A unique beer festival has come to Humboldt Park. For the first time TOUR de FAT, a festival that “celebrates great beer, good people and humankind’s most wonderful invention the bicycle”, took place in Humboldt Park this past June 30th. The festival sponsored by the New Belgium Brewing Company based in Colorado, has been producing the Tour de Fat Beer Festival for the past 11 years.

In addition, the proceeds of Tour de Fat directly benefit West Town Bikes, a Chicago non-profit organization that runs bicycle mechanic and safety workshops, as well as, The Ciclo Urbano Bike Shop at 2459 W Division St. As Alex Wilson confirms, “West Town Bikes is the non-profit partner and benefactor of the event and it is also the biggest fundrais er of the year to support our programs. But unlike other beer festivals where the tendency is to have loud music and the sale of alcohol throughout the night, this festival caters to a family audience. “This is a one day family festival, the beer sales end at 5:30pm and the festival is over by 6:00pm. We don’t let drunks loose in the neighborhood at all hours of the night starting trouble,” says Alex Wilson, Executive Director of West Town Bikes (WTB).

Tour de Fat had previously been held at Palmer Square from 2008 to 2016, but last year the New Belgium Company decided to change their formula and try a concert series featuring the rap/soul band The Roots at Northerly Island. It wasn’t as successful as they thought so this year they decided By Eduardo Arocho to return to a more neighborhood focusedfest. Coralee Montes, a resident and Business Manager at West Town Bikes says she is glad that Tour de Fat has come to Humboldt Park; “I love it because it’s in our back yard now, in the community that we serve. Now also people can visit our location down the street on Paseo Boricua”. Coralee adds that she is proud of the work that West Town Bikes does in the neighborhoods with funds generated from Tour de Fat. “WTB takes kids off the streets and puts them on bikes and we use the bikes as a tool to build community.” West Town Bikes hires 250 youth annually from the neighborhood and around the city to be trained as Bicycle Mechanics and Bicycle Safety Instructors. They also have a Boys and Girls Bike Club. In addition, WTB has created 10 administrative or program instructor positions. Although Tour de Fat has traditionally attracted a largely white audience, organizers make a clear distinction between this festival and RIOT FEST, which was forced to move from Humboldt Park back in 2016 after complaints from residents about the noise and damage to the park grounds. “Tour de Fat benefits Humboldt Park directly. Riot Fest only used Humboldt Park for their own self serving purposes” says Alex Wilson. WTB is committed to working with their long time partner The Puerto Rican Cultural Center, to increase the Latino community’s participation in the festival.

Sarah and I have been coming to Chi town TDF since the beginning 10 yrs ago. We both woke up this morning with the same feeling that yesterday was EPIC AF. Bicycles, beer, Tamale Spaceship and great entertainment makes for a Sat to remember. Speaking of entertainment, Kolars…DAMN!!! The drummer is tap dancing while banging away on the drums. #doepicshit ?? @newbelgium @newbelgium_chicago @tourdefat @westtownbikes . . . . #tourdefat #tourdefat2018 #chicagotourdefat #tourdefatchicago #humboldtparkchicago #humboldtpark #bicycles #beer #radness #getoutside #getoutsideandride #hotaswangchung