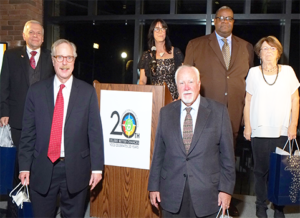 at provides a framework, structure, and coherence to 28 community-based schools throughout Chicago that serve youth who are at risk of dropping out of school. The gala was held at the Theater On The Lake in Lincoln Park, an elegant establishment on the shore of Lake Michigan. City officials from different wards were present at the event as well as key supporters and collaborators whose contributions were highlighted throughout the evening. The evening began with cocktails and hors d’oeuvres. It was the perfect time to mingle, embrace acquaintances, and salute renowned officials. Jason Hunt Jazz officially opened the program with a compelling and entertaining Jazz performance impersonating the great Elvis Presley. The night would not have been complete without the vital presence of students and graduates. They shared heartfelt testimony of their struggles and successes. They expressed their gratitude to YCCS schools’ principals and teachers for their support and for never stopping to believe in them. Particularly moving was the testimony of a woman who is now the proud mother of four successful adults. With tears in her eyes, she shared her story about a time when her children were not accepted in other schools, but YCCS opened its doors to them. With patience, understanding, and perseverance YCCS made it possible for three of her children to graduate and move on with their lives. Today, they work for the CTA and have a future ahead. She was forcefully clear that without the help of YCCS, her children would have ended up as fatalities – victims of the degenerative vices and other dangers lurking in Chicago’s neighborhoods. YCCS’s 20th Anniversary Gala raised funds to support the ongoing needs of all the schools under the YCCS umbrella. YCCS, which was founded in 1997, serves as an organizational board of directors formed to provide governance and oversight to all 28 campuses as one charter school. It is the common framework for policies and procedures as well as curriculum, teaching methods and innovations. YCCS’ success is based on a number of innovative programmatic initiatives, which allow it to achieve high standards and high graduation rate outcomes for its students. In 2009, YCCS implemented a much needed and innovative service. It created online courses for students who were under-credited and overaged. The night was filled with testimonies of the achievements of graduates and the invaluable contributions made by faculty and YCCS’ leaders, who not only believed in giving better chances to youth at risk, but also had the vision and dedication to make it happen.