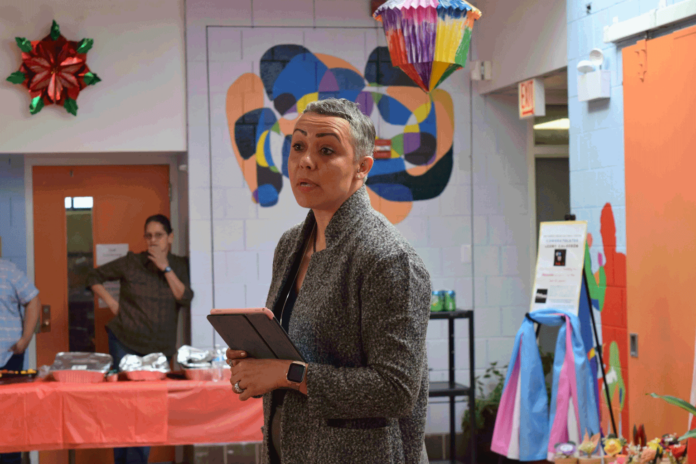 On Sunday, March 8, 2020, The Women’s Committee of The Puerto Rican Cultural Center (PRCC) celebrated International Women’s Day with an event held at the Consuelo Lee Corretjer Child Care Center, where eight extraordinary women from the community were honored in eight different categories. Nearly 100 people gathered to take part in this celebration, which was dedicated to PRCC’s dear friend, Dr. Virginia Bishop (Gini) , a long-time supporter of public health initiatives on the west side of Chicago, and a friend of and a contributor to the Dr. Pedro Albizu Campos Puerto Rican High School. The March ¡WEPA! Community Pop Up was held at the same time and venue of the event so as to encourage the attendees to buy locally from the 17 vendors that participated.

The keynote speaker, Michelle Morales, delivered an inspirational address about the struggle that we as women have to endure to overcome the limitations that society has placed on women since the beginning of time.  Little by little, those limitations have been overcome thanks to the work of strong women who have fought against inequality. Nonetheless, women still face a long path to be able to achieve complete equity. Women also need to fight against our own beliefs that are so ingrained in our consciousness, from generation to generation.  Breaking free from the little voice that tells us “you are not good enough” is one of the hardest tasks for women, even for those women who are accomplished professionals and contributors of our society.

Shortly after the speech, Nadya Henríquez, PRCC Women’s Committee Member, kicked off the award ceremony by introducing the first honoree, Jessie Fuentes, who was honored for her work in Community Building, recognizing her work as Dean of Students at Pedro Albizu Campos High School and co-chair of the Puerto Rican Agenda. Soon after, Lisa González, a long time Zumba instructor of the program Muévete, and teacher at Consuelo Lee Corretjer Child Care Center, was awarded for Personal Growth.  As Nadya explained, “She has been instrumental in encouraging women to continue to attend the physical activities programmed by Muévete, which are free of charge.” Additionally, her life is an example of self-actualization in spite of significant life challenges, overcoming obstacles. Coralee Montes was honored with the Business Award because of the success with her business “Alkaline Healing Herbs”, which now has a storefront in Albany Park, and a successful e-commerce store. The Advocacy Award was given to Marilyn Morales for her 26 years of service at the Chicago Park District, managing park facilities, staff, and working with diverse communities. She has been a consistent advocate for equity, fairness and justice throughout her career.  She takes credit for her early work in hiring African Americans and Latinos at the Park District and Humboldt Park, which continues to serve the Latino and Puerto Rican population as well as the low-income families of the community.

Xóchitl Ramírez, Director of the Consuelo Lee Corretjer Child Care Center, received the Education Award for her 36 years of service at the Child Care Center and for being as strong as a “roble” (oak tree) in weathering all the obstacles, which the Child Care Center has faced since its foundation. Jennifer Rodríguez, a mother and a student at Pedro Albizu Campos High School, was recognized with the Youth Award for her resilience and determination to succeed as a parenting youth. She is an inspiration to other students in the high school.  The recipient of the Civic Engagement Award was long-time supporter of the Humboldt Park Community and current aide at the 26th Ward Aldermanic Office, Nereida Aviles.  She was honored for her commitment to the wellbeing of the residents of Humboldt Park, her contributions as a volunteer during the early stages of the National Museum of Puerto Rican Arts & Culture, and her continuous support for the Three Kings Day Parade, which endures as a Puerto Rican Tradition in Chicago.

Last but not least, Jaiku Neoj, a transgender woman, received the first Sylvia Rivera Award. For many years, the PRCC has been working hand-in-hand with the transgender population, and this year The PRCC’s Trans Health Initiatives Coordinator, Nathalie Tirado, advocated to honor a transgender representative of the Humboldt Park Community, specifically during the International Women’s Day Celebration. Jaiku received the Award in honor of Sylvia Rivera “(July 2, 1951 – February 19, 2002) who was a Latina American gay liberation and transgender rights activist. Rivera, who identified as a drag queen, participated in demonstrations with the Gay Liberation Front and was present at the Stonewall uprising in 1969.” (Wikipedia.com)

“We stand in the front lines constantly fighting for the freedom of all, yet many times we are met with disdain, violence, ignorance- from being misgendered, having our experiences invalidated, not being able to secure housing and employment, to not feeling safe or having feelings of not being present in the world, and the list continues. Trans & GNC (gender non-conforming) individuals have been here since the beginning of time- contributing to cultures/communities all around the world- serving as healers, educators, artists etc. Honor us for us and not just for our gifts/creations… We’re in this together, we’re all we have,” said Jaiku to the audience.

Every single woman honored at the event received a unique flower corsage made by certified Puerto Rican artisan Luz Méndez. Méndez creates unique designs made out of recycled paper, ranging from flowers, jewelry, and dolls, to traditional Puerto Rican country houses, and “Tres Reyes Magos” figures, to list a few. For The PRCC Women’s Committee members, purchasing the gifts for honorees from artisan Luz Méndez, was our way to support and honor her as well. Luz came to Chicago after Hurricane Maria and has been struggling with post traumatic syndrome. She uses her art as a way of living and healing as well. If you are interested in supporting Luz Méndez, please visit her facebook page: Meadow’s Arte en Papel.