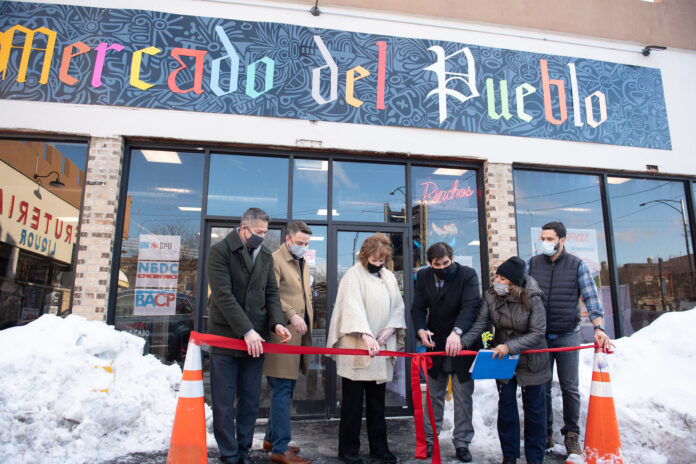 The ¡WEPA! Mercado del Pueblo Initiative and Incubator grew organically when there arose the need to find indoor space for vendors who had been participating in the community pop ups. During the warmer months, these pop-ups were held outdoors along the Paseo Boricua. The PRCC took advantage of a timely opportunity when the space occupied by a former laundromat, which had sat unused for 10 years, began to undergo renovations – thanks to the City of Chicago’s Small Business Investment Fund (SBIF), a program of the Department of Planning and Development. This former laundromat shares a parking lot with and abuts the Municipal Supermarket on the corner of Division and Rockwell. The SBIF funds were provided to Municipal owner Ziad Farhan so that he could renovate the space, after a decade of neglect.

Inside the new space, there was a palpable mix of excitement and euphoria among the 17 vendors who are part of the incubator. City of Chicago photographer, Walter Mitchell, captured people’s elation in his pictures, as guests strolled through the aisles of socially distanced vendors, the “Weperos” as they are called.

Director Carlos Bosques addressed the attendees and described how “the project was born as a result of the needs of entrepreneurs and micro business owners especially during the COVID-19 pandemic.” He continued, “The ¡WEPA! Mercado del Pueblo is an innovative project where startups can begin selling their products as they formalize and grow their businesses with the support of PRCC’s business programs, like the Illinois Small Business Development Center (SBDC), and the Neighborhood Business Development Center (NBDC).”

Bosques added, “The Mercado is an example of how the intersectionality of resources and programs can create projects like this that encourage economic development in our communities. We are developing an economy that is sustainable and self-perpetuating”. The duration of the program is one year, after which, businesses will move into a brick and mortar or a coworking “retail” space.

PRCC’s Executive Director, José E. López stirred the crowd as he described the history behind the “Mercados” found in every “Plaza” (public square) in Latin America. The mercados not only provide a marketplace to buy products but also are an intrinsic part of the culture and history of every town in Latin America and the Caribbean, and therefore, a vivid reminder of our countries. That is the vision Director López has for visitors who enter the mercado — he hopes they will be transported to a different space, and learn more about Puerto Rican culture, art, gastronomy, and our identity.

Nonetheless, the mercado is not only for Puerto Rican vendors, as it is inclusive of other minorities like African Americans, Mexicans, and the LGBTQ community. “We want to maintain the Puerto Rican identity of our Paseo Boricua alive, but at the same time we want to support our fellow African Americans, Latinos, and LGBTQ participants in the achievement of their entrepreneurial dreams,” said López.