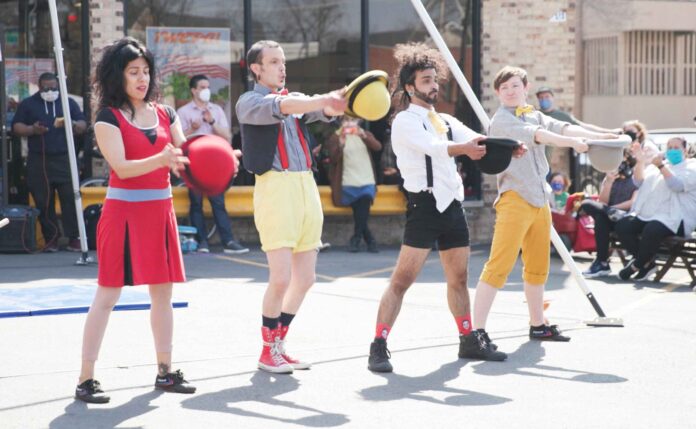 This April The Puerto Rican Cultural Center initiated a summer series that will be celebrated every Saturday. The series is housed in the ¡WEPA! Mercado del Pueblo and is produced in collaboration with Esmeralda’s Cocktail Lounge.  While both the hyper gentrification around Paseo Boricua and the COVID-19 pandemic are taking a toll on our small businesses, The Puerto Rican Cultural Center created this summer event series called “El Jolgorio de Salsa y Más…”.  The goal has been to bring foot traffic to Paseo Boricua so as to support all the locally owned and operated businesses housed on Paseo Boricua, while at the same time to create safe and amenable ways to come together as a community in celebration of our culture and of our resilience.

For the inaugural Saturday of El Jolgorio de Salsa y Más…, the featured cultural event was a circus show performed by La Vuelta Ensemble — a POC-led company, created by Puerto Rican artists Jean Carlos Claudio and Raquel Torre in 2013.  The immensely creative and talented ensemble was formed in Puerto Rico and was initially known as Circo La Vuelta. Since arriving to Paseo Boricua in 2016, La Vuelta Ensemble’s work as a community-rooted collective has become an integral part of our celebrations and of joyful resistance in Humboldt Park. Their performance for the first Jolgorio de Salsa y Más… event provided nothing less.  Scores of community residents showed up masked and socially distanced to take in the sun,

join in laughter, celebrate the Puerto Rican people’s profound creativity, and heal from the hardships we have all endured this past year.  The English translation of Jolgorio is a space for merriment.  If we understand merriment to be a conscious expression of joy, we begin to understand how these lighthearted performances camouflage the raising of more profound and critical social questions.

The first event was an intergenerational gathering with members of our community between 0-80+ years old all enjoying the beautifully chaotic activities brought to us by the La Vuelta Ensemble.  There was even a special performance from Chanelle Hernández-Rodríguez, the daughter of one of our ¡WEPA! Vendors (Janellie’s Kitchen).  After La Vuelta’s performance,

Maria Luisa Torres conducted free salsa dance classes for the community outside of Esmeralda’s Cocktail Lounge.  Although everyone had their masks on, you could feel the smiles radiating underneath, and see all the hips in the crowd swaying to the rhythm of our music.

Since that first celebration of El Jolgorio de Salsa y Más…, every Saturday has brought a new cultural performer to ¡WEPA! Mercado del Pueblo including Humboldt Park born and raised musician and poet LindaSol who performed a powerful mix of music and poetry about the Humboldt Park community, Boricua culture, Racism, and the trauma our community faces as a consequence of police brutality. El Jolgorio de Salsa y Más… also featured a documentary viewing of “The Good of Chicago: Humboldt Park”, and a Q&A session with the filmmaker El C. Concepción that led to a transformative discussion about the history of Police

brutality in Humboldt Park, how we heal from trauma as a community, and the Puerto Rican People’s Parade as a symbol of our continuous resistance and resilience.

El Jolgorio de Salsa y Más… event series is a must this summer!  Please keep up with The Puerto Rican Cultural Center’s social media to learn about all the events for El Jolgorio de Salsa y Más… happening every Saturday at ¡WEPA! Mercado del Pueblo.  Every event is brought to you by The Puerto Rican Cultural Center. All we ask is for a suggested donation, which goes 100% to the featured performers as a way to support our local artists during this difficult time for artists.